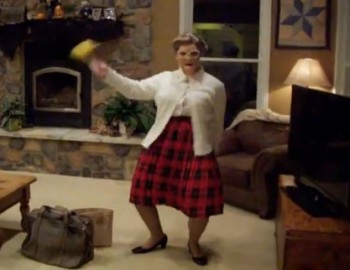 The clip Fox News aired was of a person named “Robert Christie,” who uploaded a video on YouTube of himself — dressed like the Mrs. Doubtfire character for Halloween in 2009 where he dances to Aerosmith’s “Dude Looks Like a Lady.”

The clip was shown while Greta Van Susteren asked Larry King about Williams.

Even the video credit was wrong. It was listed as “‘Mrs. Doubtfire’ 20th Century Fox.”

See Christie’s random YouTube clip in the middle of the Fox News report below on or Mediaite’s website.

Commenters on Christie’s YouTube video pointed out that Fox News aired the wrong clip. Christie also commented, “I cannot believe [Fox News’] foolishness” while adding a note about the death of Williams.

“Rest In Piece Robin, a genuinely talented entertainer and personality. He’s been an inspiration to me in countless ways both on-screen and off. His loss has shaken me to the core,” Christie wrote in part.

iMediaEthics has written to Fox News for comment and to ask if they ran a correction.

There have been a whole slew of media ethics blunders while reporting on Williams’ August 11 death.

ABC News apologized and admitted there was no “news value” to its live aerial video feed of Williams’ house.

After suggesting Williams was a “coward,” Fox News’ Shepard Smith later clarified his comments  and apologized to Williams’ family.

A radio host for British sports radio TalkSPORT, Alan Brazil, said that he didn’t “have a lot of sympathy” for Williams. He didn’t apologize but his station did.

UK Channel 4 News apologized after including in a report on Williams’ death a video clip of Williams saying “Why don’t they get a rope and hang me?” in his 1987 movie Good Morning Vietnam.

And CBS and San Francisco CBS-affiliate KPIX interviewed a KPIX employee about what he said Williams was like at an Alcoholics Anonymous meeting, opening a myriad of ethical issues.