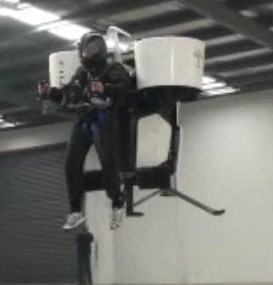 "Fox & Friends" was duped by a satire story that the Los Angeles Police Department would be buying $1 billion worth of jetpacks Oct 4. See above, screenshot detail from Martin Jetpack's video. (Credit: Martin Jetpack)

The story – that the Los Angeles Police Department was buying $1 billion worth of jetpacks for police, paramedics and the fire department –  was reported on the Oct. 4 Fox News morning program.  The $1 billion would buy 10,000 jetpacks.  Shortly after the brief segment discussing the jetpacks, Fox’s Steve Doocy acknowledged that while they had earlier said the LAPD would be buying “a bunch of them,” the LAPD in fact isn’t.  (Note: the word “correction” wasn’t said.)

See the video clip of both the announcement of LAPD-jetpacks and the “correction” here on Mediaite’s website.

The Los Angeles Times explained why the LAPD-jetpack story wasn’t believable.  “For those doing the math at home, the cash-strapped city of Los Angeles, which is regularly sending its police detectives home because it can’t pay all their overtime, allegedly shelled out a billion dollars on space-age transportation that it has never used in an emergency situation, much less tested,” The Los Angeles Times noted.

The chief of the LAPD also debunked the story.

CNET noted that while the “Fox & Friends” and Weekly World News stories aren’t real, the Martin Jetpack is.  A Martin Aircraft Company product, the jetpack was “originally designed with the leisure market in mind,” CNET reported.

Past Satire Dupings in the Media

iMediaEthics has written several times this year about media outlets being duped by satire sites.

In September, for example, Washington Post writer Jonathan Capehart reported from a satire Twitter account purporting to be the 54th congressman from California.  However, California only has 53 congressional districts.

In May, Gawker-owned blog Gizmodo was also duped by a satire site – this time a Brazilian site called Sensacionalista.