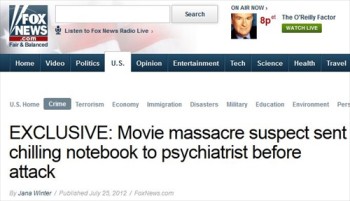 New York State’s Court of Appeals ruled this week that Fox News’ Jana Winter doesn’t have to name her anonymous sources for her reports on last year’s shootings in Aurora, Colorado at the Dark Knight Rises premiere, Reuters reported.

James Holmes’ lawyers wanted to know who told Winter about a package that their client, the accused shooter, sent to a psychiatrist that included a notebook detailing plans for a massacre. Winter identified her sources as two “law enforcement” sources, as iMediaEthics wrote earlier this year. The contents of the notebook were under a gag order. The stakes were high both for law enforcement officials, who would be outed if the reporter’s case failed, and for journalism itself, which depends on protecting sources through shield laws.

The case was heard in New York courts “because Winter lives and works in New York,” Reuters explained.

There was an error in at least one news report on the ruling, iMediaEthics found.

The ruling states that Judge Graffeo, Chief Judge Lippman, Judge Rivera and Judge Abdus-Salaam all were in favor. The other three judges — Judge Smith, Judge Pigott and Judge Read –dissented.  We asked to Reuters for a correction. Reuters spokesperson Heather Carpenter told iMediaEthics that “it was a mistake and we are correcting the error.”

Judge Victoria Graffeo, wrote about the importance of the protection of sources in the ruling:

“Safeguarding the anonymity of those who provide information in confidence is perhaps the core principle of New York’s journalistic privilege, as is evident from our colonial tradition, the constitutional text and the legislative history of the Shield Law.”

Fox News’ chairman and CEO Roger Ailes called the ruling “a major win for all journalists.” And Winter’s attorney Dori Ann Hanswirth said, according to the Huffington Post,

“Confidential newsgathering is essential for investigative journalism to flourish, and the New York Court of Appeals has issued a broad decision protecting all New York-based journalists. Today’s victory is as much for Jana Winter as it is for all journalists and the public, which has a right to receive news from confidential sources.”

Society of Professional Journalists president David Cuillier called the decision “important.”  He said “This is an important victory for journalists everywhere, and it protects the ability for the public to get the information it needs to self-govern.”

One of the three dissenting votes in the decision to dismiss the subpoena, Justice Robert Smith, argued that New York shouldn’t rule on the matter, Fox News said.  Smith wrote:

“The majority is holding, in substance, that a New York reporter takes the protection of New York’s Shield Law with her when she travels — presumably, anywhere in the world. This seems to me an excessive expansion of New York’s jurisdiction, one that is unlikely to be honored by other states or countries or to attain the predictability that the majority says is its goal.”

The full ruling is published on the NYCourts website.