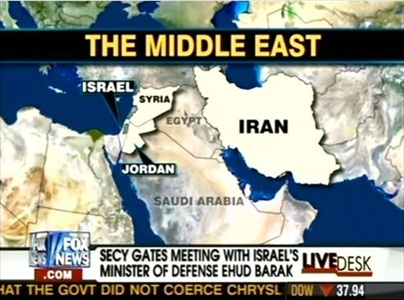 A 2009 image that throws into question whether Fox News knows where Egypt is located on a map has been recirculating the Internet in the wake of the current protests in Egypt.

The image (see here) appears to be a screenshot from a Fox News graphic of a map of the Middle East.  However, Iraq is labeled as Egypt.

iMediaEthics wrote to Fox News Feb. 1 seeking comment and confirmation that the photo is an actual image — and not Photoshopped. Fox News’ Stephanie Kelly responded to iMediaEthics that day by phone to say that she could try to find answers to our questions.  We followed up via e-mail Feb. 3 and Feb.4 asking again, but have had no response.  We will update if we receive any response.

As TNT Magazine explained, “Everyone’s been up in arms over Fox News’ rather embarrassing blunder in which the American TV channel showed a map with Egypt in the wrong place.”

However, the photo is a year and a half old, as TNT Magazine noted.  “It turns out that the map was used two years ago when it possibly illustrated that Fox News didn’t know the difference between Iran and Iraq.”

MediaMatters published the image July 27, 2009 and reported that it came from a July 27 edition of Fox News’ “The Live Desk.”  In that post, MediaMatters credited Twitter user Stefano Scalia for the image.

StinkyJournalism wrote to Scalia and asked him if it was a real or Photoshopped image and where he found it.

He wrote:  “The image is most definitely not Photoshopped, but it is *old* – I tweeted it nearly a year ago? It was retweeted by @sarahlane, and then spread like wildfire.

“I found the image on an automotive forum I frequent. I don’t know if the original poster took the picture, but it is definitely authentic. I guess I popularized it.  The Egyptian revolution has brought it back to the forefront – fine by me!”

Other sites that have picked up the image include Plixi, Scally Wag and Vagabond, Cinicinnati.com, Huffington Post, BoingBoing.net.

“But the bigger news is that the image is, in fact, old news. It was originally circulated two years ago, presumably to show that Fox News doesn’t know where Iraq is on a map. But Egypt, Iraq…same difference, as long as Fox News gets the credit for being wrong, right?

“So while the map itself may have been a legitimate gaffe on Fox News’ part (and not the work of a miscreant with mad Photoshop skills) it’s at the very least, an old gaffe. We certainly don’t condone misinformation of any kind, but we can understand the zest with which the Internet has passed this around today.”