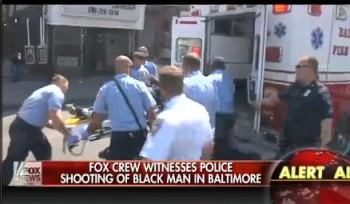 Fox News staff thought it witnessed a police shooting in Baltimore, but they didn’t check and they were wrong.

Fox News reported that “a Fox News crew witnessed a young black male running from police before he was shot.”

But now Fox has retracted that, with host Shepard Smith saying the Fox staff was wrong and that theirs “was an error that was honest and straightforward.” A Fox News spokesperson pointed iMediaEthics to Fox News’ apology, here.

The headline has now been changed to “Conflicting reports on gun incident in Baltimore.”

The Fox News story currently reads: “Initial reports said a man had been shot, but police then said a gun dropped by a man running from police went off, and that no one was hit by a bullet. Earlier, Baltimore Police tweeted the man was shot “multiple times,” but police later said no one had been shot.”

Fox News broadcast the claims, interviewing its own Mike Tobin in Baltimore who said “As he was running away, that officer drew his weapon, and fired, and struck the individual who was running away. He was a young black male.”  The victim was “in bad shape,” Tobin said.

Watch the broadcast below.

Despite the Fox News report, the Baltimore police tweeted that the claims were “unfounded.”

Media Advisory: The reports of a shooting in the area of North Ave / Pennsylvania Ave are unfounded.

“We screwed up,” Shep Smith says about the FOX report that someone got shot at North and Penn. #Baltimore

According to Mediaite, which has video of Smith’s statement about Fox News’ reporting, Tobin later admitted he never saw the gun fired, and “only heard a single gunshot.”

“Nobody was shot,” a police officer told Fox News.

“What’s happened is we screwed up,” Smith said.

“Mike Tobin thought he saw somebody get shot. And there was a gun and a patient on a stretcher…and the truth is according to police there is no gunshot victim,” Smith said.

Below, see a screenshot of Smith’s tweets about this.

A Baltimore city councilman, Brandon Scott, called out Fox News for the error when talking to CNN’s Jake Tapper this afternoon. “I’m also concerned that we have members of the media being irresponsible. We know one news outlet, Fox News, said that they saw it happened…Media needs to report what they know, not what they think.”

On Fox News’ the Five tonight, Tobin gave an “update” about his reporting. “It would be very hard to duplicate a situation that lookd more like a guy being shot,” Tobin said.

“We saw the footchase…with the officer pursuing a young black man. It was the observation of me, my security team and my camera man that the officer had his weapon drawn. We heard a gunshot, we saw the person being chased on the ground. I arrived at the conclusion that the individual had been shot as you naturally would. When we walked up on him, the person on the ground looked to be in bad shape. The police now say he was uninjured so it ‘s not clear if he hit his head, if he was exhausted or  he was just play acting….Obviously the initial conclusion that he was shot is inaccurate now. But if the situatio were to duplicate itself…I’d be hard-pressed not to arrive at the same conclusion given all the things that transpired in such a quick flurry of activity.”