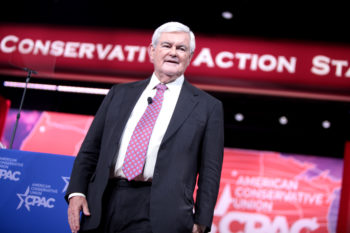 Fox News suspended its relationship with Newt Gingrich given the possibility that Donald Trump may pick him as his running mate in the 2016 U.S. election.

“FOX News Channel has mutually agreed to suspend its contributor agreement with Former Speaker of the House, Newt Gingrich effective immediately. Due to the intense media speculation about Gingrich’s potential selection as Donald Trump’s Vice Presidential candidate, we felt it best to halt his contributor role on the network to avoid all conflicts of interest that may arise.”

CNN’s Brian Stelter reported the news on Twitter today, and in a news story, noted “Gingrich has been a Fox News contributor since last October.”

In 2011, Fox News ended its contracts with Gingrich and Rick Santorum given that they were considering running for president, as iMediaEthics wrote at the time. They previously had been suspended.