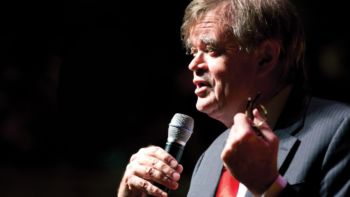 “Minnesota Public Radio (MPR) is terminating its contracts with Garrison Keillor and his private media companies after recently learning of allegations of his inappropriate behavior with an individual who worked with him,” the statement read. Minnesota Public Radio said it didn’t know of any other allegations currently, but listed a “confidential hotline” for complaints or information.

In response, Keillor told the Associated Press the allegation is a “more interesting and more complicated than the version MPR heard.” He added, “It’s some sort of poetic irony to be knocked off the air by a story, having told so many of them myself, but I’m 75 and don’t have any interest in arguing about this. And I cannot in conscience bring danger to a great organization I’ve worked hard for since 1969.” iMediaEthics has written to Minnesota Public Radio to ask what, if any, explanation Keillor gave in response to the allegation.

National Public Radio noted that yesterday, in an opinion piece for the Washington Post, Keillor defended Sen. Al Franken, who himself is facing groping allegations.

Minnesota Public Radio listed several steps it is taking in response to the allegation.

* end distribution and broadcast of The Writer’s Almanac and rebroadcasts of The Best of A Prairie Home Companion hosted by Garrison Keillor;

* change the name of APM’s weekly music and variety program hosted by Chris Thile; and,

* separate from the Pretty Good Goods online catalog and the PrairieHome.org website.

“MPR and APM will work closely with public radio stations to help make the programming transitions as seamless as possible.”