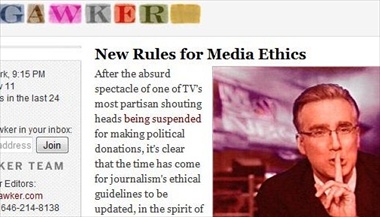 Gawker issued suggestions for new media ethics guidelines. See an above detail from a screenshot of Gawker's post. (Credit:Gawker)

Gawker published a set of suggestive guidelines for updated media ethics. They included full disclosure financially and politically, letting journalists vote and contribute to campaigns (as long as donations are disclosed), categorize journalists as either objective reporters or opinionated analysts, avoid conflicts of interest (by changing beats or not befriending sources) and be honest.

As a reminder, Gawker Media Company owns nine blogs, four of which are fairly recognizable for their trafficked stories – Gawker, Gizmodo, Deadspin and Jezebel.

The idea of Gawker offering advice on media ethics strikes StinkyJournalism as somewhat ironic, given the company’s recent history of public debate over their questionable editorial decisions.  In just the past five months, Gawker and its blogs were criticized for some of the following noteworthy stories: