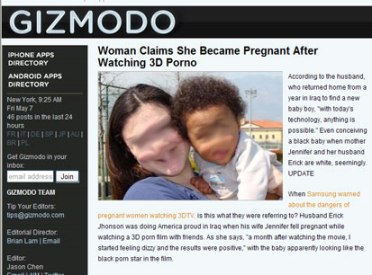 Gizmodo reported the satirical story, but has since pulled the story from its site. Mediaite captured a screenshot. (Credit: Mediaite)

A Brazilian satire site ran a story on May 4 about an American woman who said she had been impregnated by watching 3-D pornography.  Gawker-owned Gizmodo and other sites picked up the story only to be embarrassed when the story turned out to be a hoax, Mediaite reported May 13.

“Gizmodo quickly deleted the story, going so far as to clean out their online cache so no one could see it. All that is left are a few dead links on Google,” Mediaite reported.  But, Mediaite grabbed a screenshot, which is available here.

Mediaite, which compared the Brazilian Sensacionalista to “a low-scale Onion written in Portuguese,” noted that the story and Web site signaled readers that it was fake.

The first clue is that the site’s slogan is: “the newspaper exempt from truth.”

And, in case readers missed that clue, the names of the two people involved are spelled unconventionally to say the least.

A Google translation of the May 4 article reads that Erick Jhonson (sic) had served in Iraq for one year. He returned to find his wife, Jennifer Stweart (sic), had given birth to an interracial baby.  The Sensacionalista story said that Stweart said she got pregnant from watching a 3D pornographic movie.  Mediaite reported that Sensacionalista wrote that Jhonson said “with today’s technology anything is possible.”

An update appended to the original story reads that the story was “evidently false”and the widespread dissemination of the story wasn’t intended or expected.

Sensacionalista instructed sites to “next time check the information.  This site is a site of humor.  Nothing here is real.”  iMediaEthics contacted the author of the Sensacionalista story, Nelito Fernandes, who wrote in an e-mail to iMediaEthics that he e-mailed several media outlets and requested that any re-reporting of the original story be removed.  Fernandes explained that Sensacionalista is “a small humor site” that on every page reads “all stories are fake, fictional.” He writes:

“Do you believe that arqueologists found a 3,000 years snack at a bar in the center of Rio? That’s the kind of ‘news’ that we publish.  A humor site that is called ‘sensacionalista’, do you know what that means? ‘Sensacionalist’. Do i need to say anything else?

“This is ‘domestic made’ site. We got no money for that, a few friends read that, a few friends that work together wrote the site, my wife writes there too. Our “business” is to make laughter, only this. We get US$ 1.00 (one dollar) a day with Google adsense. We use Open Source Content Managment System, free. We do not have programmers, etc. This site was offline for six months because we could not afford the the host server.  That’s what we are.

“Then, someone with millions of readers all over the world, plenty of money in cash, gets our texts, put online, no check, nothing, and declares themselves ‘journalists’… Who’s the joker, anyway?”

The fake story hasn’t just triggered embarrassment for the sites that re-reported the story.  iMediaEthics confirmed with Fernandes that Mediaite’s report that the photo of the woman with the interracial baby was just “some random photo” pulled from the Internet.  The woman in the photo is real, as is her baby.  What isn’t true, according to Sensacionalista, is Mediaite’s report that, apparently, people who saw the story are saying she’s cheated on her husband.

Referring to the woman being accused of cheating, Fernandes wrote in an e-mail to iMediaEthics that “anyone that reads the article with good sense will know that this is a joke.”  Looks like Mediaite got duped as well!  iMediaEthics asked Mediaite about this.  Jon Bershad, who penned the article for Mediaite, wrote in an e-mail to iMediaEthics that he didn’t “have quotes from the woman herself,” and that he had assumed from the update that woman or her family had contacted Sensacionalista.

Fernandes wrote to iMediaEthics that he did contact a lot of sites, but only a few removed the article and image.  Fernandes said that he thought that news sites like Mediaite might have come to the conclusion that The Sensacionalista was accused of slander because of his apology.

“I never talked to Mediaite or any other foreigner site.  I am not a kid spreading rumors on the internet.  I am 39 years old.  I could never tell (something) to another journalist that I know it’s fake.  The site is not serious but that doesn’t mean that the author isn’t.”

Bershad e-mailed iMediaEthics that he had “inferred from the update that the Brazilian site published that the woman or her family had contacted them,” but that he has now updated his article to make this more clear to readers.

IT Wire reported May 8 that “New technology seems to disable the ‘bull’ detector in too many people.”  IT Wire noted that interestingly, the comments section of stories about the impregnated woman weren’t very skeptical of the story’s legitimacy.

IT Wire also noticed that the child in the photo was probably about a year old, which would mean the woman must have gotten pregnant about 2 years ago, when 3D pornography did not exist.

iMediaEthics reported June 28, 2004, and July 1, 2004 on another story claiming an inexplicable birth, this time involving an Iranian woman and a frog.  On June 27, 2004, the BBC reported that an Iranian woman had given birth to a baby frog. According to the BBC report, “The Iranian daily Etemaad says the creature is believed to have grown from larva to an adult frog inside her body.”

iMediaEthics checked out the report and found that the pictured frog was from China.  Experts at the American Museum of Natural History identified the frog as a Chinese gliding frog, which is only found in southern China – not in Iran. The BBC quickly removed the photo when iMediaEthics brought it to their attention.

iMediaEthics wrote about Gawker on May 4.  Gawker paid $5000 for an iPhone prototype and wrote a series of stories on the device.  Then, the police raided the house of a Gizmodo editor and seized some of his computers.

Gawker’s editor Remy Stern confirmed for iMediaEthics that their sister publication was duped.  Stern e-mailed iMediaEthics that “Gizmodo, our sister site, ran that post.”  We are still waiting for a response from the editor of Gizmodo.