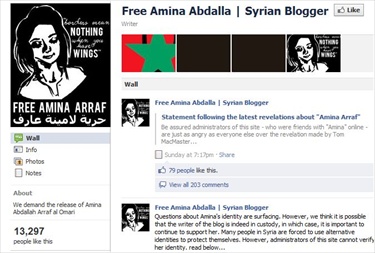 The administrators of a Facebook fan page in support of "Amina Arraf" attracted more than 13,000 fans. (Credit: Facebook)

Last week, media outlets and the online community reported on the alleged kidnapping of Amina Arraf, the lesbian blogger in Syria behind the “Gay Girl in Damascus” blog. But, not only was the kidnapping a hoax, the identity “Amina Arraf” turned out to be a fake.

Tom MacMaster, a 40-year-old American man living and attending school in Scotland, has admitted to penning all posts signed by, and creating the identity of, “Amina Arraf.”  He also admitted making up the story that the fictional Arraf was kidnapped by three armed men in Syria.  He has been condemned for not only wasting the resources of government bodies that worked in Syria to locate Arraf after the kidnapping claims, but also for rekindling the debate on whether bloggers are reliable sources of information.

And, as a result, news outlets that reported on the alleged kidnapping and even interviewed “Amina Arraf” prior to the fake kidnapping are adding corrections, editor’s notes and explanations for reporting on the hoax.

An American living in Scotland, Tom MacMaster, admitted in a lengthy blog post that he “is the sole author of this blog and always have been.”  He explained that he posed as a lesbian woman online because he found his online comments on the Middle East were received better if he commented under the name “Amina Arraf” than under his own “distinctly Anglo” name.

He added that he has create “a number of profiles on dating sites” with fake identities and suggested that he did so in order to improve his fiction writing. With his Amina Arraf identity, MacMaster indicated it started as “just a name” but then as time went on and her comments were well-received, he continued to develop her backstory.

“I enjoyed ‘puppeting’ this woman who never was. I knew what she looked like in my head and I grabbed photos of a woman whom I have never met who looked exactly like what Amina should look like. That was stupid and possibly evil of me and I’m really, really sorry about that. I gave Amina a facebook page; she soon had friends and admirers.”

The blog “Gay Girl in Damascus” told the story of “Amina Arraf” living in Syria, even though MacMaster was living in Scotland. And, not a lesbian Muslim woman.

MacMaster claimed he “tried to stop” using her fake identity online but it “was hard.” He apologized specifically to several people, including LezGetReal’s Paula Brooks, for his hoax. (Like “Amina Arraf,” the identity of “Paula Brooks” has also been revealed as a fake identity puppeted by an American man).

On June 6, MacMaster blogged posing as Amina’s cousin “Rania” and reported that Amina was “missing.”  “Rania” also blogged that “Amina was seized by three men in their early 20’s.”  The men were described as armed and “assumed to be members of one of the security services or the Baath Party militia.”

The story of Amina’s alleged kidnapping gained much traction online. As Reuters explained, “The State Department launched an investigation, Avaaz started a letter writing campaign demanding her release, and major newspapers published word of her arrest.”

A Facebook page created in support of Amina following her alleged kidnapping boasts more than 13,000 fans.  The “administrators” of the fan page, who were completely taken in by the hoax, issued a statement after MacMaster’s deception was revealed, saying they were “as angry as everyone else” over the hoax.

“This foolish and cruel hoax has distracted from the real issue in Syria – that the Syrian people are sacrificing their lives for calling for an end to a regime that silences, disappears, tortures and murders its people, a regime that has repeatedly fired directly into peaceful demonstrations.”

The Scottish Herald reported that Edinburgh University, where MacMaster is studying, has blocked his “computing privileges” in light of the hoax.  According to the Herald, a spokesperson for the university confirmed that the school’s principal blocked MacMaster’s computer privileges until the university completes an investigation into “whether the student has breached university computing regulations.”

CNN interviewed “Gay Girl in Damascus” last month and reported on her alleged kidnapping. CNN has since posted an “update” to its interview noting that MacMaster had admitted to being behind the blow.  CNN added “CNN has not been allowed into Syria to cover the unrest and draws from social media and interviews with witnesses on the ground — which CNN makes careful efforts to verify — to inform its reporting.”

CNN left its reported interview with MacMaster intact though.

But, iMediaEthics notes that as of the morning of June 15, CNN still hasn’t posted a correction to its June 7 story reporting that Arraf was allegedly kidnapped.

The Associated Press issued a correction reporting the hoax and stating:

“In a June 7 story, The Associated Press reported erroneously that a Syrian-American lesbian blogger who criticized the Syrian government on a website had been arrested in Damascus.”

The Guardian issued a correction about the articles and the photographs it published to accompany its stories, Regret the Error reported.

The Guardian noted that it had included pictures that were allegedly of Arraf, but later found out they were actually of a UK-based woman named Jelena Lecic. The Guardian apologized to Lecic.

The Guardian’s readers editor, Chris Elliott, explained in a lengthy June 13 post about the Guardian’s interactions with Lecic. According to Elliott, Lecic, who works for the Royal College of Physicians, called the Guardian to let them know the photo was of her and not Arraf.  She called later because the photo hadn’t been removed.  The Guardian hesitated in removing the photo because it was afraid “this might be an attempt to undermine the ‘real’ Amina Abdallah.”

Elliott reported that Lecic contacted the UK media regulatory body the Press Complaints Commission over The Guardian’s publication of her photo and after the PCC contacted them, The Guardian removed the image.

According to Elliott, “The Guardian did not remove all the pictures until 6pm on Wednesday 8 June, 27 hours after Jelena Lecic first called the Guardian. It took too long for this to happen, for which we should apologise. “

The Daily Beast featured a short summary of the reports that Arraf was “still missing after she was seen…being bundled into a car by three armed men.”  That story doesn’t feature any correction as of the morning of June 15.  The story links to the Washington Post story about the alleged detaining.  The Washington Post’s report now includes an editor’s note about the hoax.

Australian Broadcasting Corp. (ABC) reported on the alleged kidnapping June 7 and has since posted an editor’s note explaining that ABC removed the image “purported to show Arraf” because of questions of Arraf’s identity.

CBS News also wrote a June 8 story about Arraf’s alleged kidnapping. As of the morning of June 15, there was still no correction or update that the story was a hoax.

The Washington Post reported June 7 on Arraf’s blogging and her alleged capture. In an editor’s note, the Post disclosed that Arraf’s story and identity was a hoax and provided links to further stories on the hoax.

The Post reported that Arraf admitted his fake identity in a phone interview.

iMediaEthics is writing to all of the sites that haven’t posted corrections on their stories. We will update with any response.

The New York Times wrote that MacMaster’s hoax calls into question the reliability of blogs.

“The hoax reflects the problem of blogs as unverified sources of information — especially in a country like Syria, where the government has limited outside access and where Internet reports have been important conduits for news.”

But, Reuters commented that the hoax “isn’t a journalistic scandal” so MacMaster shouldn’t be linked with those infamous for tarring the name of journalists, like fabricators Jayson Blair and Stephen Glass.  Instead, Reuters argued that “MacMaster has much more in common with the misguided activists who have fooled the public with tales of victimization in order to advance an agenda.

Grassroots LGBT news site Gay Middle East posted two responses to the hoax. Sami Hamwi commented “shame on you” to MacMaster and claimed that the hoax has “harmed many, put us all in danger, and made us worry about our LGBT activism.”

Hamwi called on “readers and the western media” to focus attention on the “authentic people in the Middle East who are blogging and reporting stories about the situation in their countries.”

“Add to that, that it might have caused doubts about the authenticity of our blogs, stories, and us. Your apology is not accepted, since I have myself started to investigate Amina’s arrest. I could have put myself in a grave danger inquiring about a fictitious figure. Really… Shame on you!!!”

Another person writing for Gay Middle East, Daniel Nassar, commented that MacMaster has brought “the LGBT movement in the Middle East years back.”