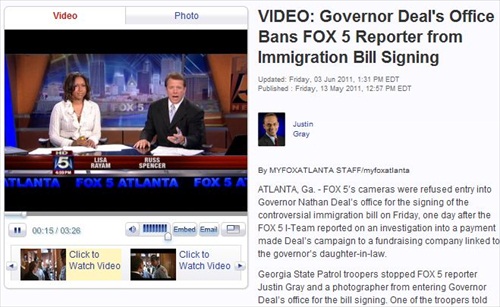 Gov. Nathan Deal of Georgia, a Republican, has banned access to Atlanta Fox-affiliate WAGA after the station ran “an unflattering story,” MediaBistro reported.

The story, which aired April 12 — the day before WAGA staff were denied access– reported on “large payments” from Deal’s campaign fund to his daughter-in-law’s fundraising company.  The story also reported that there is “little public evidence” that the daughter-in-law’s company is real.

iMediaEthics wrote earlier this year when Georgia newspaper El Nuevo Georgia published a doctored photo of Gov. Deal pictured as a Nazi.  The newspaper explained its photo doctoring as a way to focus attention to Hispanic issues.

A reporter and photographer from the station were kept by state troopers from attending an April 13 bill-signing at the governor’s office, according to the station. See here a video of the reporter and photographer being kept out of the bill signing.  That evening, WAGA’s Dale Russell, who reported the story about Deal’s daughter-in-law, stated on air that the story was accurate.

Deal’s spokesperson, Brian Robinson, reportedly defended Deal’s paying his daughter-in-law’s company by telling the Journal Constitution that Deal’s campaign “never hid the fact Denise Deal ran the governor’s fund-raising campaign and having a family member do so is not illegal.”

Robinson called for the Fox affiliate to apologize and labeled the station’s report “a shoddy piece of journalism in which they should be embarrassed.” Robinson added that by preventing access, the governor’s office is able to balance its not having “a TV station.”

“We don’t have the power of the airwaves,” he is quoted as saying.

According to Robinson, WAGA’s story includes “lots of innuendo but no context and very little facts.”

The Atlanta Press Club sent a “formal letter of protest” to the governor over the media ban.  The statement reads in part:

“We want to express our concern that your office used the Georgia State Troopers and police to keep a member of the media out of a news conference.”

The club went on to call the blocking of the Fox-affiliate station a violation of freedom of the press and unacceptable.  “We would like your assurance that this was an unfortunate, unprofessional and isolated incident and that journalists don’t have to fear access restriction by state troopers or police under your administration,” the club concluded.

iMediaEthics is writing to WAGA for comment and will update with any response.