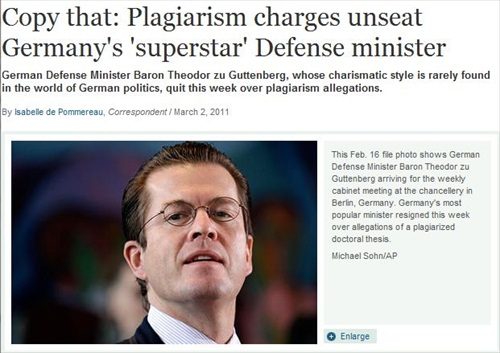 Theodor zu Guttenberg, pictured above, resigned from his position as Defense Minister and had his doctorate revoked. (Credit: AP/Michael Sohn via Christian Science Monitor)

Baron Theodor zu Guttenberg resigned from his position as German defense minister after being accused of plagiarizing his PhD dissertation, Christian Science Monitor reported. He also “gave up his seat in parliament,” according to Deutsche Welle.  Guttenberg is a Bavarian baron, according to a 2009 Times Online profile.

Guttenberg has since been nicknamed the “Cut and Paste” minister and “Googleberg.” According to Christian Science Monitor, 51,000 scholars petititoned for German Chancellor Merkel to “dismiss” Guttenberg before he stepped down.

The 475-page dissertation was written in 2006 about “the development of the US and European constitutions.”  According to the Sydney Morning Herald, “more than two-thirds of the dissertation” was alleged to be “unattributed copying.”

The accusations started in February when a “law professor doing a review of the unpublished thesis uncovered incidents of plagiarism.”   An unnamed “German newspaper” published a report Feb. 16 claiming that “parts of the thesis appeared to draw on articles in other newspapers, a US State Department website, and other essays without attribution,” according to Christian Science Monitor.

Der Spiegel also claimed that Guttenberg “included almost the entire” 10-page analysis by a civil servant in his dissertation as well, but without citing or crediting the civil servant’s 2004 work.

According to Deutsche Welle, “more than 20 percent” of his thesis is accused of being plagiarized.

Guttenberg commented about his resignation:  “I’ve always been prepared to fight but I have reached the limits of my strength.”

German prosecutors are “proceeding with an investigation” into the claims, Deutsche Welle reported March 7.  Senior prosecutor Reiner Laib is quoted as saying that there have been “more than 100 complaints” about the charges of plagiarism and “possible charges” of copyright violation.

According to Monsters and Critics, “if found guilty, Guttenberg could potentially face both a fine and jail time.”

Meanwhile, “Guttenberg’s doctoral thesis supervisor, Peter Häberle, and his colleague, Rudolf Streinz, defended themselves,” claiming that the “‘recognition of plagiarism’ with the technical means available at that time was ‘almost impossible.'”

In a later statement,  Häberle commented that the “deficiencies” of Guttenberg’s dissertation were “profound and unacceptable,” according to George Mason University’s History News Network.  His “successor,” Oliver Lepsuis, reportedly said: “A con artist fooled us. Nobody could have imagined the audacity of this kind of plagiarism.”

According to Slate, Guttenberg ” was considered a likely candidate for chancellor and a rising star in his conservative Christian Social Union (CSU) party.”