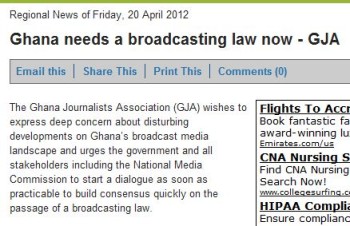 The Ghana Journalists Association also said the law would “regulate the broadcast industry” by requiring broadcasters ” to adhere to stringent regulations in addition to ethics,” according to Ghana Web.

“We urge journalists never to relax in their gate-keeping role by ensuring that ethnic and divisive utterances, similar to the one recently made on radio by the Assin North Member of Parliament Kennedy Agyepong, which has contributed to heightening political tension are not allowed on our airwaves,” the Ghana Journalists Association is quoted as saying in a statement.

Last month, Ghana’s National Media Commission issued a statement on the use of “inflammatory language, especially hate speech and language which incites,” as we wrote.