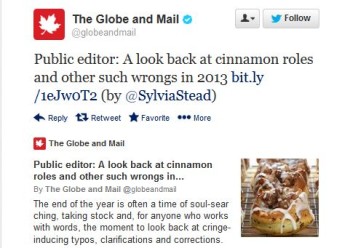 In 2012, the Globe and Mail ran “55 a month” (or 660 for the year), according to Stead. The figures combine print and online corrections Stead attributed the increase in corrections to the “ever-increasing demands” on staff and “alert readers” submitting correction requests.

“Many times the devil is in the details: names, titles and numbers,” Stead wrote. “Greater care with the basics would help to reduce such errors but they are almost impossible to eliminate.”

Fellow Canadian newspaper The Toronto Star published 985 corrections in 2013 — 403 in print and 582 corrections online, as we previously wrote.