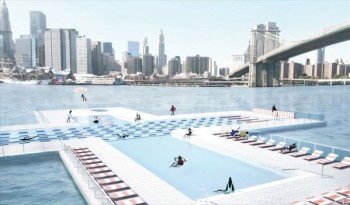 The Washington Post unpublished an article that reported Google was building a pool in New York City’s East River.

The Post admitted in its editor’s note that the story “overlooked that Google has no financial or design role with the project.”

The editor’s note, published in replacement of the article, says the article was taken down “due to its flawed premise.”

The story was titled, “‘Why it matters that Google is helping to build a giant pool in New York City’s East River.”

Real Pool Proposed, but not by Google

There are actual plans to build a pool in the East River; it’s just that Google isn’t involved in building it, which is what the original article wrongly claimed.

According to the Associated Press, the East River Plus Pool is expected to be a floating “Olympic-sized structure with cruise-like decking” ready in two years. More than 3,000 people contributed to a Kickstarter campaign and donated $273,114 toward funding the pool.

The designers of the pool –Family NY and PlayLab — are using Google Drive to “post information on Plus POOL’s water quality.” But that’s it, according to how ABC News described Google’s relationship to the pool project:

“+Pool is owned and designed by Family NY and PlayLab. +Pool is using Google Drive to design a dashboard for the public to be informed on the quality of the water. Google has no further involvement in the project. We regret the error.”

An excerpt from the original, incorrect Washington Post article is published on the Atlanta Journal Constitution‘s website. It reads:

“You’ve probably noticed that Google is getting into some major infrastructure lately. Forget about just server farms and campuses, now it’s about satellite launches, citywide Google Fiber rollouts and driverless car fleets. And, by 2016, the company plans to help launch a Google Pool in New York City’s East River.”

Google search results still produce the article, but the link goes to the editor’s note. iMediaEthics was unable to find a cache of the original report.

iMediaEthics has written to Google and +Pool for comment. We’ve also reached out to the Washington Post for more information about how the error occurred and if Google complained about the story.