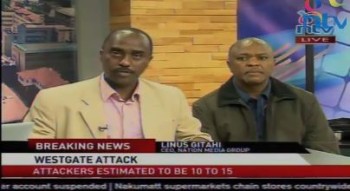 The cover image showed a close-up image of a victim of the attack.  The victim’s face is covered in blood. The text on the front page reads: “A victim shrieks in pain after gunmen attacked a city shopping centre, killing at least 30 people yesterday. Mall Massacre.”

The New York Daily News used the same photo on its front page Sept. 22, iMediaEthics notes. But, the Daily News photo and Nation photo are reversed images of the same shot.

Charles Apple, a visual journalist and the Focus Page editor for the Orange County Register, pointed iMediaEthics to the Nation’s front page and his blogpost on the matter.  Apple, who disclosed in his blogpost that he “spent two weeks consulting last summer” for the Nation, tracked down a “low-resolution” image of the cover.

In a follow-up post, Apple wrote that the original photo used by the Nation was from Reuters and had been “flopped.”

iMediaEthics notes that the Daily News used the photo correctly, and that the Nation changed the photo to show it 180 degrees different.

See below the original Reuters photo.

The Nation’s Linus Gitahi apologized on Twitter for the “poor judgement” in publishing the photo.

Kenyans, we made a poor judgement on our front page photo today. We sincerely apologize for the hurt caused.

He added in response to a reader that the newspaper has “taken all offending stuff from the web.”

Gitahi also apologized on TV, Jambo News Pot reported. The “graphic” photo “should not have been used,” Gitahi said.

“It is not in the tradition of Nation Media group to cause such offense. We apologize to the family of the victim, and to our readers.”

Further, Gitahi said the company is “committed to the highest editorial standards and respect to the sensitivities of audiences.”

See below a video of the apology.

Onyango-Obbo wrote on Twitter in response to claims that Odindo was fired that Odindo “took responsibility and a suspension,” but wasn’t fired.

iMediaEthics has written to the Nation asking what prompted the apology and for more information regarding this incident. We will update with any response.