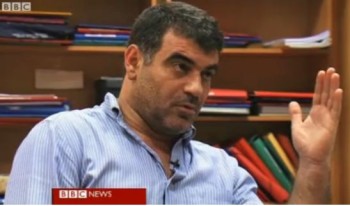 Greek magazine editor Kostas Vaxevanis was arrested and later acquitted over accusations that his magazine Hot Doc broke “Greece’s data privacy law by revealing citizens’ private information” by publishing the “Lagarde list,” which includes the names of “2,000 Greeks with Swiss accounts who are regarded as potential tax evaders,” the Guardian reported.

According to the Guardian, the names were in an “electronic file given in 2010 by then French finance minister Christine Lagarde to the Greek government.”

The UK National Union of Journalists’ Michelle Stanistreet called Vaxevanis’s arrest “outrageous” and a “blatant attack on the freedom of the press.” After Vaxevanis’ acquittal, Stanistreet commented that he “represents journalism at its very best.”

According to a Nov. 1 Guardian story, Vaxevanis was aquitted after defending his publication of the names. He could have “faced up to two years in jail and a €30,000 fine (£24,000) if convicted.” Vaxevanis is quoted as saying:

“Journalism is printing what someone else does not want printed; everything else is public relations…As such it was my duty to reveal this list.”

In an Oct. 30 report, the Financial Times reported that Vaxevanis said the publication was “in the public interest.”  He added:

“We know the list is accurate. It refers both to legitimate accounts held by businesspeople and individuals and to others that we believe were used for channeling funds for purposes of tax evasion.”

The Telegraph noted that the International Federation of Journalists’ president Jim Boumelha testified on Vaxevanis’ behalf, or as he said “in order to try to unravel this absurd farce.”

The Guardian noted that Hot Doc “normally has a circulation of about 25,000” but “sold 100,000” the week in question.  And, another publication, newspaper Ta Nea “reprinted the names” in with “10 pages” in print.

iMediaEthics is writing to Hot Doc seeking further comment about this issue and will update with any response.

The New York Times noted that Vaxevanis’ case is one of “several” current cases involving Greek journalists including the libel arrest of Spyros Karatzaferis “after he threatened to reveal what he said were classified documents obtained by hackers involving the bailout agreement between Greece and its so-called Troika of lenders: the International Monetary Fund, the European Central Bank and the European Commission.”

Two other journalists – Marilena Katsimi and Kostas Arvantis — “were suspended by state-run television after they broadcast a report backing allegations of police torture and suggested that Greece’s public order minister, Nikos Dendias, resign,” the Daily Telegraph and the New York Times noted.