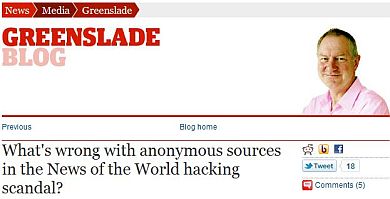 Greenslade criticized The Independent’s Stephen Glover’s Oct. 11 article on the phone hacking scandal.  Glover wrote that former News of the World editor and current communications director for UK Prime MInister David Cameron, Andy “Coulson’s enemies will need to do better than this.”  He added that “Coulson is not going to be finished off by an anonymous source.”   (The New York Times’ report used many anonymous sources).

In response, Greenslade questioned Glover’s statement.  After all, Greenslade wrote, the News of the World often uses anonymous sources to drive stories.

“Moreover, when challenged about the veracity of such stories, the response is always the same: we cannot breach the confidentiality of our sources and stick by what they have told us,” Greenslade explained.

Further, Greenslade noted that the New York Times’s report didn’t rely on just a couple of anonymous sources, but rather “a dozen former reporters and editors” from the News of the World.

“Surely a man who has lived by exploiting anonymity should not complain about anonymous sources,” Greenslade opined.

As Press Gazette reported Oct. 6,  a former News of the World features editor, Paul McMullan, admitted in an Oct. 5 City University debate that he hacked phone messages, bank records and medical records while working for the newspaper. (McMullan’s name wasn’t mentioned in the New York Times’ report.) The debate was headlined “How Far Should a Reporter go? The lessons of the News of the World phone-hacking story.”

Greenslade was one of the debaters that night, but he wasn’t debating his opinions. Rather, he went to “be the voice of the [News of the World] throughout” the debate, since no representative of the newspaper would be present.

According to Vanity Fair magazine, Murdoch recently “declared war” on the New York Times, which defends its report as not motivated by competition but by a good story.

Also at issue is the role of former News of the World editor, Andy Coulson, who left his position after one of his reporters was convicted of hacking.  Coulson is currently serving as UK prime minister David Cameron’s communications director.