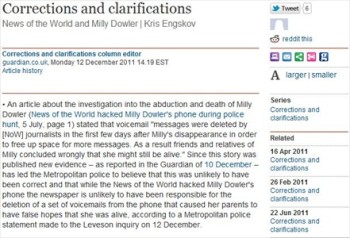 The Guardian issued a correction Dec. 12 to is July 4 Milly Dowler report. (Credit: The Guardian, screenshot)

The Guardian retracted its July 4 claim that News of the World deleted Milly Dowler’s voicemails in 2002. In a Dec. 12 correction, the Guardian explained that “the newspaper is unlikely to have been responsible for the deletion of a set of voicemails from the phone that caused her  parents to have false hopes that she was alive.”

That “new evidence” about the hacking of Dowler’s phone came from a Dec. 12 statement from the UK police to the Leveson Inquiry into press standards and practices. The correction has since been appended to the bottom of the July 4 article in question.

According to the BBC, a police spokesperson, Neil Garnham said “It is conceivable that News International journalists deleted the voicemails, but the Metropolitan Police Service have no evidence to support that.”

In a Dec. 9 article, before the police told the Leveson Inquiry about the possibility Dowler’s voicemails were auto-deleted, the Guardian’s Nick Davies and David Leigh reported that “It is understood that while News of the World reporters probably were responsible for deleting some of the missing girl’s messages, police have concluded that they were not responsible for the particular deletion which caused her family to have false hope that she was alive.”

According to that article, the police had told Dowler’s parents earlier this year that her voicemails were being deleted; however, “evidence” indicates that her ” phone would automatically delete messages 72 hours after being listened to.”

According to the Guardian’s report “the deletion removed every single message from her phone” and police currently don’t think News of the World was responsible.

However, Dowler’s family issued a statement that reads in part that the family was told by the police “the News of the World had listened to their missing daughter’s voicemail and deleted some of the messages.”  According to the Australian, a police spokesperson, Neil Garnham, said that the police “did not tell the Dowlers the voicemails had been deleted,” however.

The Dowlers’ family attorney also is quoted by the BBC as saying, “The ‘false hope’ deletion might or might not have been done by someone either commissioned, or from The News of the World – so it’s too early to say [the newspaper was not responsible].”  He added that even if News of the World journalists didn’t intentionally delete voicemails, their actions in listening may have “triggered” the deletions in question.

Richard Caseby, News Corp-owned the Sun’s managing editor and the “joint managing editor at News of the World when it was closed down,” claimed that the Guardian’s editor Alan Rusbridger “sexed up his investigation into phone hacking and the wider issue of wrongdoing in the media,” according to an article in the Sun.

Caseby’s comments were made during Dec. 13’s Leveson Inquiry hearings.

While criticizing the practice of phone hacking, Caseby slammed the Guardian’s allegation that News of the World deleted Dowler’s messages and claimed the allegation was the “twist of the knife” in closing the newspaper.

The Guardian’s Nick Davies defended the report in a BBC Newsnight interview Dec. 14, according to Journalism.co.uk, which noted that Davies said that “nobody disputed a word of that story” until recently “when new evidence, that was not available, to everybody’s surprise showed that one element of that story is now in doubt.”