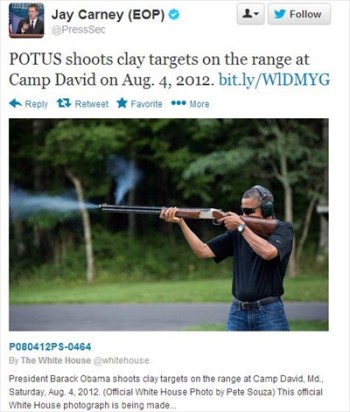 A few days after The New Republic tweeted and then deleted a fake photo of President Obama skeet shooting, the White House released an actual photo of the president skeet shooting. But, some are claiming that photo is fake too.
The photo, tweeted by White House Press Secretary Jay Carney, shows Obama holding a gun with two streams of smoke coming out of it and carries the caption “POTUS shoots clay targets on the range at Camp David on Aug. 4, 2012” with a link to a photo on the White House’s Flickr account.  That photo, which warns against Photoshopping the image, saying “The photograph may not be manipulated in any way,” describes the image as:
“President Barack Obama shoots clay targets on the range at Camp David, Md., Saturday, Aug. 4, 2012. (Official White House Photo by Pete Souza)”
iMediaEthics asked Michael Hampton, Jr., executive director of the National Skeet Shooting Association if the media has been contacting the association to fact check or verify what the new picture shows before reporting on it and claims that it is phony.
Hampton, who called the fake photo of Obama skeet shooting “bad,” told us that we were the seventh reporter to contact him or the association  to fact check the new photo showing Obama shooting at Camp David. The six other fact checking inquiries were from The New York Times, Washington Post, USA Today, two White House correspondents and a local newspaper.
We were the only one of those outlets to send him a large-size version so he could verify his initial thought about which brand of shotgun the President was packing. The New York Times, for one, mistakenly reported that Obama was holding a rifle, but later corrected its Feb. 3 story on the photo that “misstated the type of weapon” Obama was holding. The Times’ correction reads:

“Correction: February 2, 2013
An earlier version of this article misstated the type of weapon that President Obama fired in a photo released Saturday by the White House. It was a shotgun, not a rifle.”

Hampton explained by phone to iMediaEthics:
“It’s a Browning Citori. Yeah exactly that’s a very common, very, very popular firearm that is used to do white target shooting. There’s nothing that really stood out that was unusual with the gun. The gun is a very common gun. I mean if you came to the world skeet shoot, where there are a thousand competitors, you would see many, many, many guns just like that. Yes.”
iMediaEthics is writing to the gun’s manufacturer Browning and the White House for comment.  The only issue iMediaEthics sees that we want to ask the manufacturer about is the unusual amount of smoke pouring out of the barrel . See the image below of a competitor who loads his gun with smoky black powder blanks that causes dramatic effect. We did not find any photo showing skeet shooters having such smoke emitting emissions after examining videos on YouTube including those from gun manufacturers and dealers.

Image of rider with lots of smoke streaming from his gun barrels creates a dramatic effect. iMediaEthics is asking the manufacturer about similar smoke emissions from their Browning Citori model like the one President Obama was firing. (Credit: Denny Chapman, who won CMSA Mounted Rifle Shooting match)

Hampton explained to iMediaEthics that “If it’s been ported,” then there could be that much smoke emitting. He continued,”Basically what that means is that the top of the barrel has holes drilled in it on both sides… You can buy them like that right from the factory.”

The purpose is to reduce the kick–called recoil–that hits you after the discharge.
Seeing so much smoke “depends on what the weather was like and the type of ammunition that you’re shooting. The volume of the smoke showing [also] depends on the [dark] background. You have a well-lit area and when you shoot there’s plenty of smoke coming out every time,” Hampton asserted.
For those interested in more about the shotgun, Hampton explained to iMediaEthics that the gun in Obama’s hands is “called an over and out shot-gun, where the barrels are stacked. That’s the most common gun with a shot that’s not a semi-automatic. Besides where you have the barrels at are aside each other aren’t really used in competition. Those are more of a gentleman’s hunting gun. They’re an older style gun that’s not nearly as common, you’ll see 10,000 over and unders before you see one side to side.”
He continued, “Over and under [barrels] are by far the most popular form of shooting” the other is good for Quail shooting.
Hampton’s final words were some professional feedback about Obama’s stance for the next time he shoots clay pigeons with his posse. “What you see is most people will have their legs spread apart, knees bent…that target is crossing left to right, so you’re swinging the gun moving left to right or right to left , so normally your legs are spread apart a little bit more [than Obama’s]. And you have more weight on the front foot. Um, it looked like he was a novice.”
As to why his gun wasn’t point upward to shoot clay birds? Hampton said, “If he’s shooting in the high house, the high house actually is on a trajectory that goes downward and the house is on a trajectory that goes up, so if he shoots it late it would be moving.”

With contributions by Kyemma Vivian Campbell

UPDATE: Feb 6, 2013, 5:22PM EST:  iMediaEthics called the Browning gun manufactuer multiple times but has not received a response. We added a photo credit and information about the competitive rider.