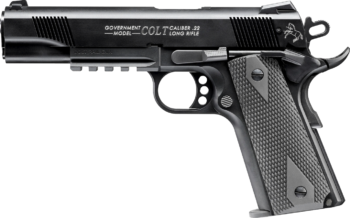 In a recent article in the Washington Post, James Hohmann argues that the failure of the Congress to act on gun control legislation is due to an intensity gap between supporters and opponents of stricter gun laws. As he writes,

“The vast majority of Americans favor legislation being considered today in the Senate that would restrict people on the terrorist watch list from buying guns. But the measure will fail because those who oppose stricter gun laws are, on the whole, more passionate and politically organized than the average voters who support them.”

This rationale very conveniently excuses Washington gridlock and members of Congress who refuse to consider even tame gun control measures to reduce gun violence. Instead, it blames “average voters” for not being more passionate and politically organized.

The evidence for Hohmann’s view is tentative at best. A Pew poll in 2013 reported that 6% of gun control supporters contributed money to “an organization that takes a position on gun policy,” compared with 25% of gun rights proponents. That gap of 19 points is supposed to explain why the GOP absolutely refuses to support any gun bill opposed by the National Rifle Association. 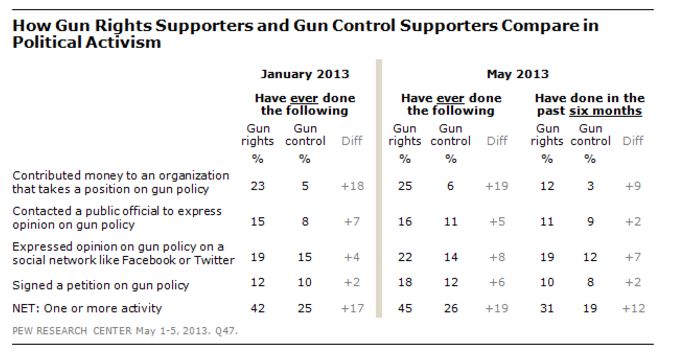 The Pew poll also compared activity of gun control supporters and opponents in three other areas – contacting a public official, posting an opinion on a social network, and signing a petition on gun policy. In all three areas, the gap was much smaller.

Regardless of how much outreach by either group, numerous polls have revealed overwhelming public consensus on several gun control measures, including intense majority support even among Republicans. Political leaders hardly need citizens to sign petitions or make calls or express their views on social media in order to divine the high level of public support for some gun control measures.

Three recent polls – by CBS News, HuffPollster, and CNN/ORC – have all shown an increase in support for gun control measures, following the mass shooting in Orlando.

For some measures, CNN found overwhelming support: background check on anyone attempting to purchase a gun (92% favor to 8% oppose); preventing certain people, such as convicted felons or people with mental health problems, from owning guns (87% to 12%); preventing people who are on the U.S. government’s Terrorist Watchlist or no-fly list from owning guns (85% to 14%).

HuffPollster also found overwhelming support for “preventing individuals on the terror watchlist from purchasing firearms” (86% to 7%).

And CBS News found overwhelming support for “a federal law requiring background checks on all potential gun buyers” (89% to 8%).

These highly lopsided figures suggest that the intensity gap favors those who want universal background checks and a ban on gun purchases for people on the terror watchlist – both proposals that were just defeated in a Senate vote.

The intensity gap in favor of very specific proposals is not recent. In September 2012, an iMediaEthics poll specifically measured intense opinions on several items:

As the numbers make clear, on all the items, the intensity gap favored doing something rather than nothing to deal with gun violence.

And a poll in January 2011, conducted by American Viewpoint and Momentum Analysis reported “strong” majority support for several specific gun control items (each percentage reflects only those who indicated “strong” support; those who said “somewhat” support are not included):

None of these proposals, all showing an intensity gap in favor of passing new legislation, has been adopted by Congress.

We know who’s to blame for this inaction. And it’s not “average voters.” 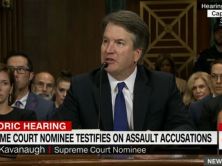