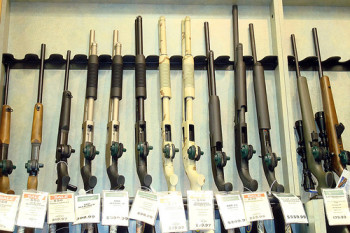 This distinction – between what the public supports in general and what specific proposals the public supports when given the opportunity – is highlighted by the iMediaEthics poll major findings: While only about a third of Americans say they strongly support stricter gun control laws in general, substantial majorities also indicate strong support for new gun control laws that would require the registration of all guns with the state and would also require criminal background checks on all gun buyers regardless of where and from whom they purchase the weapons. Also, by better than two-to-one margins, Americans strongly support new gun control laws that would make it illegal for most people to own assault weapons and would limit new purchases of guns to one a month.

Background to the iMediaEthics Poll

Some pollsters seem doggedly determined to convince its readers that the public is divided on the issue of gun control laws. In January 2011, for example, shortly after the shooting in Tucson, Arizona, where a gunman killed six people and wounded 13, including Rep. Gabrielle Giffords (D-AZ), Pew Research released a poll showing that the public was unmoved in its general attitudes about gun control:

“In the wake of the Tucson shootings, there is no significant change in public views on the issue of gun control and gun rights. Currently, 49% of Americans say it is more important to protect the right of Americans to own guns, while 46% say it is more important to control gun ownership. In September 2010, 50% prioritized gun control, 46% gun rights. In this regard, there is no sign that the longer trend toward an emphasis on gun owners’ rights has abated.”

(The last statement of the previous paragraph is a totally gratuitous prediction. Of course, “there is no sign” that the trend has abated, but there is also no “sign” that the trend will not reverse or level off. What kind of “sign” was Pew looking for that would have allowed it to claim anything about the future of the trend? The prediction says more about the author’s views than the direction of the trend.)

Shortly after the July 20, 2012 shooting in a movie theater in Aurora, Colorado, Pew Research again released a poll proclaiming the same conclusion as it had a year and a half earlier – that the public was unmoved by the shooting:

“There has been no significant change in public views on the issue of gun control and gun rights following the July 20th shooting at a movie theater in Aurora, Colorado. Currently, 47% say it is more important to control gun ownership, while 46% say it is more important to protect the rights of Americans to own guns. That is virtually unchanged from a survey earlier this year in April, when 45% prioritized gun control and 49% gun rights.”

[Note this time, Pew made no prediction that the downward trend in support for gun control would not abate because, in fact, the trend had abated (leveled off), contrary to Pew’s assertion a year and a half earlier.]

The problem with this emphasis on people’s general attitudes about gun control is that it tells only half the story, and perhaps not the most important half. The other half of the story is that many people, while ambivalent or opposed to new or stricter gun control laws in general, nevertheless – when offered specific new and stricter gun control proposals – express widespread support.

To his credit, Blumenthal did mention at the end of his article that there was widespread support for some gun control legislation. But like Pew, his emphasis is on the general vague opinion about gun control, rather than on what Americans say about specific proposals.

Most polls employ forced-choice questions on gun control, which typically make the public appear more engaged on an issue than is the case. Thus, to get a more realistic assessment of the public’s views of gun control, iMediaEthics again commissioned SurveyUSA to conduct a poll that employs iMediaEthics’ Authentic Measurement Design – which takes into account both non-opinion and opinion intensity. The telephone poll was conducted August 10-13, 2012, and includes a representative sample of 840 adults nationally, with 69% of respondents interviewed by a recorded voice, and 31% interviewed by a live interviewer on respondents’ cell phones. (For further details, see here.)

A frequent question asked by pollsters is the following forced-choice question (offering no explicit “no opinion” option):

“In general, do you feel that the laws covering the sale of firearms should be made more strict, less strict, or kept as they are now?“

That wording was included on the iMediaEthics questionnaire for one half of the sample.

Of the other half sample, we asked a similar question, but avoided implying that gun control laws today are “strict.” We wanted a more neutral term, and asked instead:

In general, do you feel that more laws are needed to deal with the sale of firearms, fewer laws are needed, or is there the right number of laws now – or don’t you have an opinion one way or the other?

Note that this question explicitly provides a “no opinion” option, not included in the standard question.

The results of these questions are shown in the graph below.

It appears as though it makes little difference as to whether the question asks about how strict the laws should be, or about how many laws there should be. The percentages of respondents saying “more strict” (44%) or “more laws” (42%) are about the same, just as the percentages saying “less strict” (13%) and “fewer laws” (14%) are about the same.

The major differences between the two questions are the percentages saying “no opinion” and “kept the same.” The no opinion response is much lower (3%) when the option is not explicitly offered (in the standard question) than when it is offered in the iMediaEthics wording (15%). The “same as now” option in the standard question appears to be a place-holder for many respondents who would otherwise say they have “no opinion.” The “same” option goes from 40% when “no opinion” is not offered, to 29% when “no opinion” is mentioned as an option – an overall 11-point drop that mirrors the 12-point increase in “no opinion.”

The key policy question these days is whether, in the aftermath of several high-profile shootings there is public support, or even a public “demand,” for more or stricter laws governing the purchase of guns. As both results make clear, at most it appears that just over four in ten Americans want more gun control laws.

But even these percentages, as it turns out, are too high. To determine how intensely people feel on the issue, we asked supporters how upset they were (very, somewhat, not too, or not at all upset) that there are not more or stricter laws today.

The fact that many supporters are not upset with the status quo suggests that, despite their expressed support for more or stricter laws, they really aren’t demanding that the government do anything to change the status quo. These people are essentially content to leave things as they are.

The net result is that in principle only about 32% to 37% of Americans really want more – or stricter – gun control laws than what we currently have.

These results are important in understanding that the general issue of gun control is not a salient one to most people. Only about a third of the public is exercised enough about the issue to say they want more or stricter laws in principle, leaving a large majority that at most doesn’t mind the current situation.

The Specific vs. The General

The widespread lack of public commitment to stricter laws in principle doesn’t mean, however, that there isn’t a reservoir of support for some additional efforts. When respondents are asked the general question about whether they want stricter gun control laws, they don’t have time to think of all the laws that currently exist, but instead give a top-of-mind response that probably reflects more their concern about gun violence in general than any detailed awareness of existing laws. But when the interviewer mentions several explicit proposals, respondents tend to evaluate each one on its own merits – not so much as to whether that proposal is in addition to other laws, but rather whether the proposal by itself makes sense.

There are relatively small differences between the results of Form A and Form B, so it’s useful to focus on the combined results.

Thus, to get a more realistic picture of where people stand on an issue, it’s worthwhile to focus only on people who feel “strongly” in support, or “strongly” in opposition to the proposal. With that in mind, we can see that Proposal #2 (requiring all guns be registered with the state) and Proposal #3 (requiring criminal background checks for all gun buyers) are strongly supported by large majorities of Americans – about two-thirds and three-fourths respectively.

Proposal #1 (banning purchases of semi-automatic rifles) and Proposal #4 (limiting gun purchases to one a month) are supported strongly among the public by a 2-to-1 margin or greater – though more than a third of Americans in each case don’t have strong views one way or the other.

The results above show a majority (54%) leaning toward support of banning semi-automatic rifles, with 40% strongly in favor and 25% strongly opposed.

For the above proposal, about two-thirds of Americans strongly favor a requirement that all guns be registered with the state, while only 14% are strongly opposed. Yet, registering a gun with the state is not required by most states.

In most states, it’s possible to buy guns at gun shows and online with no criminal background check. The results here show that Americans are overwhelmingly in favor, with 77% strongly in favor, compared with only 5% strongly opposed.

A slight majorityof Americans leans toward preventing a person from buying more than one gun a month but among people who feel strongly, the ratio is about two-to-one (43% to 19%).

Other Poll Results on Gun Control

Other polls have also shown that when it comes to specific gun control proposals, large majorities of Americans express support. (Caution: All of these polls – except as specifically noted below – don’t measure intensity, so even when a majority supports a proposal, it’s possible that less than a majority feels “strongly” about the issue. When the percentages are in the 60s or higher, however, there’s a good chance that a majority overall would have expressed “strong” support.)

These high levels of support were measured after CNN first determined that only about half (48%) of those same respondents wanted “major restrictions” on owning guns (38%) or wanted to make all guns illegal (10%).  These figures, of course, measure the general attitudes of Americans about gun control, which – as we’ve indicated earlier – tend to conflict with the views Americans have about specific gun control proposals.

Both Time magazine and CBS News report polls they took in 2011 showing more than 60% of Americans favoring a ban on “assault weapons.” An ABC/Washington Post poll in January 2011 also reported 57% support for banning high-capacity ammunition clips.

And a poll in January 2011, conducted by American Viewpoint and Momentum Analysis, reported “strong” majority support for several specific gun control items (each percentage reflects only those who indicated “strong” support; those who said “somewhat” support are not included):

Understanding the public’s views on gun control requires more than asking a vague theoretical question about whether, in principle, there should be more or stricter laws governing the sale of firearms. It’s important also to ask whether people support very specific proposals that could affect people’s ability to purchase guns and ammunition.

Still, the general question provides some insight into the salience of the issue to the public: A substantial majority of the public is not clamoring for more or stricter gun control laws.

On the other hand, the public does strongly support several specific measures to restrict the purchase of guns.