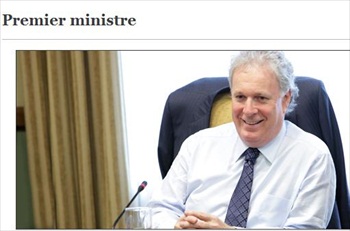 Jean Charest, pictured above, is still alive despite a fake death report posted by hackers on Le Devoir's website.

The fake news story claimed that Quebec’s prime minister,Charest, “had died of a heart attack.”  The Montreal Gazette added that the story claimed Charest died “at the CHUM hospital and that the health faciliuty had confirmed the news.”

According to the Globe and Mail, “The fake report went to some lengths to dupe readers into believing the news: it was written in a standard journalistic style, using a professional photo, official-looking fonts and even the byline of one of the newspaper’s reporters.”  The story carried the byline of Le Devoir’s Jeanne Corriveau, who commented to the Montreal Gazette that she “only heard about [the hack] hours later.”

According to the Gazette, the story was reported on by “radio stations and by Twitter users before it was declared a hoax.”

According to CTV, the fake story “was up for about an hour and a half.” After then, the newspaper’s publishers “regained control” of the site and posted an apology note.

The apology stated “We offer our most sincere apologies to the premier. Measures are being  taken to find the person responsible for this crime,” according to the BBC.

Le Devoir’s editor-in-chief, Joseee Boileau, is quoted by the Montreal Gazette commenting on the impact of the attack.  “This is serious; it was an attack on both the premier and our credibility as a newspaper.”

The newspaper’s site had been hacked, but CTV didn’t report who was responsible. The Globe and Mail stated that the newspaper suspects an outsider hacked the website, as opposed to a Le Devoir employee posting the fake news.

Le Devoir also “filed a complaint with the police” over the incident, according to CTV.

StinkyJournalism wrote in June when hackers posted a phony news story reporting that Canadian prime minister Stephen Harper choked on a hash brown and had to go to the hospital. In that case, the fake news was posted on Harper’s website, but news outlets including a Toronto radio station reported the fake hash brown incident.

StinkyJournalism has written to Le Devoir for comment and will update with any response.