Hello from Papua New Guinea…By the way, we read The New Yorker 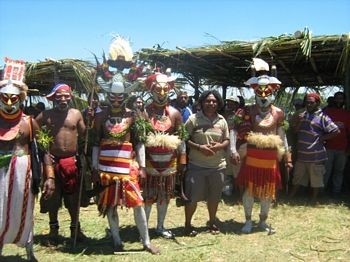 "Students from the Southern Highlands dressed in their traditional dress during the Divine Word Univesity's (DWU) cultural day show," writes Jeffrey Elapa, a recent graduate of DWU and photographer of above image. He continued, "Traditional culture is still performed during special occasions." Elapa said, "The costumes now have changed significantly. Modern items like Western material have now been integrated with the traditional costumes to make it more colorful. However, the idea is still the same. Culture has been part of our life and it still exists even though Christianity has greatly influenced most of the cultural beliefs and practices. " (Credit: Jeffrey Elapa)

The Pig in a Garden: Jared Diamond and The New Yorker Series

Art Science Research Laboratory’s StinkyJournalism.org is publishing a series of essays on the controversy surrounding Jared Diamond’s New Yorker article, “Annals of Anthropology: Vengeance is Ours.” The essay series titled,The Pig in a Garden: Jared Diamond and The New Yorker, is written by ethics scholars in the fields of anthropology and communications, as well as journalists, environmental scientists, archaeologists, anthropologists and linguists et al., and edited by Rhonda Roland Shearer, Alan Bisbort and Sam Eifling. *Note: Savage Mind people are leaving for the summer for research and find themselves unable to keep up with posting essays of, what has turned out to be, more contributors than anticipated. StinkyJournalism.org will continue the series with the same editors. Alex Golub will comment from Papua New Guinea as time allows. Brother Michael McManus’ essay is sixth in the series.

Our staff here has long had great respect for the New Yorker. One staff member recalls that an article in the magazine helped to expose the asbestos issue many years ago.

Our students, too, are well aware of the New Yorker. Second-year journalism students, in fact, are required to take a unit called “International News Awareness,” for which they rely on many newspapers and magazines from around the world, accessed mostly by the Internet. Among these essential “texts” are New Yorker magazine. Just in the last year, the controversial cartoon on the cover of the July 21, 2008 issue of the New Yorker had the desired effect of provoking debate in the Communications Arts Journalism Department on the subject of media freedom and a journalists’ obligations to their audience.

Further testament to our university’s familiarity with the New Yorker : Our physician in Madang places copies of the magazine in his waiting room. The point I am trying to make, with all these examples, is that we are not strangers to the publication, as perhaps its editors may have assumed.

Nor are we unfamiliar with the work of Jared Diamond, who has written extensively about PNG. Indeed, some of our lecturers refer to two of his key works in their courses: Guns, Germs and Steel; and Collapse: How Societies Choose to Fail or Succeed. Almost everything that he writes is widely read among the academic and research communities here.

Anything written by people who question Diamond’s work also finds a receptive audience here. For example, “Do Civilizations Really Collapse” by Eric A. Powell, an article that appeared in the March/April 2008 issue of Archeology sparked much discussion among faculty and students. In the article, Dr. Powell calls Diamond’s work “ambitious” and says that “he gets the past wrong” and that archaeologists “recoil” at some of his statements.

My colleague at DWU, Associate Professor Pat Gesch, the head of PNG Studies, says he naturally follows the work of Jared Diamond. His comment on the article “Vengeance is Ours” in the New Yorker is that the mere scope of the writings of Jared Diamond invites skepticism. Dr. Gesch thinks that if the article misused information, then this would give rise to questions about the accuracy of material in the writer’s other publications.

In the May 2008 edition of Contemporary PNG Studies: DWU Research Journal, book reviewer Maurice McCallum describes Diamond’s recent “blockbusters” as “dubious in argument” (p. 124). He is referring to the two books Guns, Germs and Steel; and Collapse.  Brother McCallum works at the Melanesian Institute in Goroka, an ecumenical researching and teaching institute designed to help member churches speak more clearly to the needs of the people.

A follow-up letter to the editor in the May 19, 2008 issue of the New Yorker raises questions about Diamond’s article, but I think it would have been fairer to the letter writer (Professor Cerny of Rutgers University, Newark, NJ) if he had known that he was not dealing with thoroughly checked peer-reviewed factual material.

These comments came to me while I was preparing this response, after asking eight people to react to my suggestions:

1.    Jared Diamond’s article can be seen as a work of fiction rather than a description of a real-life situation.

2.    Reading such articles only satisfies the appetite of those who want to see exotic and primitive works of human evolution as museum pieces.

3.    A couple of years ago, a well-known person traveled to Papua New Guinea to see a primitive tribe for himself. He was bitterly disappointed that what was described in the tourism promotional pamphlets was not there to see.

4.    Jared Diamond has misrepresented the people in PNG in this article. From an ethical standpoint, this amounts to deceitful and irresponsible practice.

5.    Just a brief glance at collection in the Noser Library (Divine Word’s historical library) shows that prejudicial writing about PNG has a long history. (The New Yorker is available through the library’s subscription to the EBSCO Host data base)

6.    Surely even journalists would warn their named informants that they were going to identify them as murderers. It’s about writing standards more generally; even a memoirist would be more sensitive knowing his/her audience was global, not local.

Two universities in PNG teach courses in journalism– Divine Word University and the University of Papua New Guinea. Graduates from these institutions find work in the media and in other communication workplaces. We at DWU teach our students that journalism demands the highest possible standards of accuracy, fairness and balance.

Any suggestion that writing that had been banished from the scientific scene because of inaccuracies would be welcomed into the journalism fold would indeed undermine these standards. I cannot speak for other journalism education institutions, but I suspect they would all teach similar ideals around the world, using similar textbooks.

In this country it is ethical journalism practice not to name a person who has committed a crime until after police have laid charges against that person. Even then, the crime is only an allegation, not a fact, until a court determines the outcome of a case. Any interference in this process by the media is regarded as an act of contempt. Clearly the New Yorker article did not accord Daniel Wemp this level of respect. No PNG citizen would dream of treating a U.S. citizen in this way.

The issue of peer reviewing articles needs to be considered. My experience with journals (from Australia and other places) is that reviewers uncover a vast array of errors and generally contribute to an improvement in the quality of articles.

I suggest that if the New Yorker had submitted the Diamond article to any of the above mentioned academics (or other U.S. researchers with extensive knowledge of PNG) before publication, then there would have been fewer errors, fewer criticisms, and perhaps even some laurels from PNG. Has anyone in PNG sent any laurels, or are we all engaged in sending the darts that New Yorker editor David Remnick finds “frankly mystifying” (as he was quoted in an article in Science magazine)?

I hope I am not exaggerating the task of a fact checker by expecting he would verify every detail in an article, using some kind of surgical instrument to excise all dubious bits of information. He would be in touch with many experts in relevant fields of endeavor and check specific facts.

PNG journalists, like all members of the profession, have to work hard to find multiple sources to corroborate stories, especially outside the main urban centers. Research conducted in 2006 (funded by Ausaid) found that 79% of 1,260 news stories examined over a three-week period on PNG radio, TV, and in newspapers were single source stories. Clearly, journalistic practice has to improve in PNG, just as it has to elsewhere. In time, with improved communications and Internet facilities, this will likely come to pass.

Until then, we as a developing world country are cursed by the single-source story but are surprised that The New Yorker with its reputation of first-world fact checking was not acting as they consistently promise readers in the case of “Vengeance is Ours.”

Here, when this occurs, and the story has not been corroborated independently, the process follows a familiar and painful pattern. That is, the story is followed the day after by corrections, apologies, threats or whatever is deemed appropriate in this high risk business when there is no verification. The New Yorker is now merely being drawn into the resulting corrections-apologies-threats phase born of this perilous single source curse.

As a postscript to this response, Divine Word University has its own story to tell about being defamed by a U.S. citizen. This person, who was from Los Angeles, spent some time working at the university as a volunteer in the late 1990s. He left the country under a cloud and then spent the rest of his life defaming the university, its president, its staff and its supporters on the Internet. He did us a great deal of harm. Since his death, nearly all remnants of his work have now disappeared from the net.

Brother Michael McManusupn is an Australian Marist Brother who has been working at Divine Word University, Madang, Papua New Guinea, since 1998. He is now the Head of the Department of Communication Arts (Journalism). He teaches Communication Skills, Introduction to Journalism and other subjects. He was a reviewer for the UNESCO Model Curricula for Journalism Education for Developing Countries. He was a member of the research team which produced the Ausaid funded State of the Media Report in PNG in 2007.

Hello from Papua New Guinea…By the way, we read The New Yorker