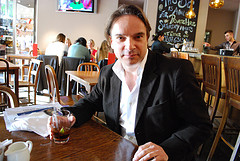 In what The New York TImes called “the most exciting scandal to emerge from Britain’s historian community since — well, ever.” historian Orlando Figes has admitted to writing anonymous negative book reviews on Amazon.com.  Figes wrote critiques of other authors’ work and complimentary comments on his own, The Daily Mail reported April 23.

Figes, a history professor at Birkbeck, University of London, is a Russian historian and a prize-winning author and a regular contributor to the influential New York Review of Books.

When first confronted about the reviews, “he denied it and threatened libel action,” The Independent reported. Figes’s comments started in 2008, The New York Times’ ArtsBeat blogged.

This is London reported April 27 that Figes’s “behavior has highlighted, perhaps more vividly than ever, the need for libel reform” in the UK. As StinkyJournalism reported April 2, it’s much easier to sue in the UK for libel than in the U.S. because the burden of proof is on the defendant, not the plaintiff.  The defendant must prove that what was published was true.  Jack Straw, Britain’s Justice Secretary, is currently pushing for libel reform.

Seattle Weekly blogged April 26 that the scandal started when author Rachel Polonsky saw that an Amazon user named “Historian” had written negative reviews of her book.  “’Historian’ had brutal opinions of nearly every recent work of Russian history, except for The Whisperers by Orlando Figes, which he described as ‘beautiful and necessary’” Seattle Weekly wrote.

The Financial Times reported that under the username “Historian,” Figes wrote reviews “condemning his rivals’ work and praising his own.”  Specifically, Figes wrote that Robert Service’s biography of Stalin was “awful” and that Polonsky’s Molotov’s Magic Lantern: A Journey in Russian History was “the sort of book that makes you wonder why it was ever published.” But, Figes wrote that his book The Whisperers: Private Life in Stalin’s Russia was “fascinating.”

Polonsky found that “Historian” had the same home address as Figes,the BBC reported April 24.  (Some reports including The Sun Daily, This is London, and History News Network also attribute comments to “orlando-birkbeck.”)  As StinkyJournalism reported earlier this month, some anonymous users are finding news sites less protective of their anonymity.  The (Cleveland) Plain Dealer outed an anonymous user earlier this year to discover the commenter’s e-mail address was that of a county judge.

First Figes threatened to sue anyone suggesting he was behind the reviews, History News Network reported.  Then his wife, a lawyer and senior law lecturer at Cambridge University, Stephanie Palmer, said she wrote them.  Finally, Figes fessed up to writing the “poison pen” reviews and said “the crisis has exposed some health problems,” The Independent reported.

“I need some time now to reflect on what I have done and the consequences of my actions with medical help,” The Independent reported Figes said.

The Independent wrote that “Reports circulated on (Figes’s) increasingly depressed state of health, believed to have been triggered by a trip to Russia to interview victims of the gulag for his 2007 book The Whisperers.”

Amazon “declined to comment on whether it would change its book review practices as a result” of the incident, according to The Financial Times.  But, reviews on its site by “Historian” have been removed, The New York Times wrote.

Figes went on sick leave April 23 for an unspecified length of time, The Independent reported.

In a statement, Figes said he made “some foolish errors” and apologized to everyone involved.  “‘I am ashamed of my behaviour and don’t entirely understand why I acted as I did. It was stupid. Some of the reviews I now see were small-minded and ungenerous, but they were not intended to harm,’” The Daily Mail reported.

The Daily Mail reported Polonsky’s book Molotov’s Magic Lantern has at least benefited from the publicity.  Polonsky told The Daily Mail the book had “dropped to about 1,600 on Amazon’s best-seller list.  Now it is back to 500 again.”