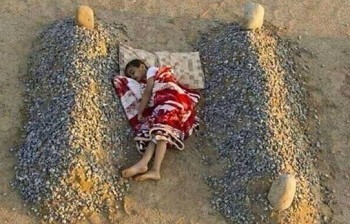 This photo has been mis-labeled as an image from Syria. (Photo by Abdul Aziz al Otaibi)

Indian daily newspaper The Daily Bhaskar and others were hoaxed by a fake photo purporting to be of a Syrian child sleeping in between his parents’ graves.  But, the photographer, who lives in Saudi Arabia, posed the image with his nephew for an art project. He tells iMediaEthics he’s “worried that some terrorism group use my photo” for propaganda or violence.

The Daily Bhaskar’s Jan.17 story, “Heartbreaking pic: Syrian child sleeps between graves of his parents,” perpetuated the hoax by featuring the photo of the child and is captioned:

“This is the picture of a Syrian child sleeping between the graves of his mother and father. Both his parents were killed by the Bashar’s regime in Syria. The people assumed that the child was missing from the area and when they found him, he was sleeping between his parents’ grave. It shows how affectionate and attached the child is to his mother and father. Many people have been posting and tweeting the picture on several social networking sites.”

There is a “note” at the bottom of the story in which the site tries to excuse any responsibility for the photo. The note reads:  “Daily Bhaskar is not responsible for the authenticity of the photograph.”  But just one day later, the Daily Bhaskar re-reported in a news story without correcting the error. So, without running any correction to admit its error, the newspaper wrote about debunking the photo.

See here how its follow-up report makes no mention of the fact that it was hoaxed. It reads:

‘If you recall there was a picture doing rounds on Twitter on Friday which was claimed to be of a Syrian boy sleeping between graves of his parents. Guess what! It was a fake picture.”

Harald Doornbos, a reporter who says he “divides time between Isalambad, Pakistan and Arab World,” wrote Jan. 17 that the photo wasn’t legitimate. Doornbos, who is credited with first debunking this photo, explained the photo was taken in Saudi Arabia but a photographer posed the image with his nephew. Doornbos wrote on his blog:

“There is only one problem: The picture is not from Syria, but from Saudi Arabia.

“Frankly, there are more problems regarding the picture: Because there are no bodies in the graves either.

“And the graves are not graves but piles of stones made to look like graves.

“And the sad sleeping boy did not lose his parents at all. He is the little son of the photographers’ sister, who made these pictures as part of an art project.”

Doornbos asked “via an interpreter,” the photographer Abdul Aziz al Otaibi, about the way his photo was misrepresented. al Otaibi said he was “really shocked how people have twisted my picture.” He went on: “It is just not fair to take one of my photos totally out of context and use it for your own propaganda.”

al Otaibi told Doornbos that he posed the graves out of stones near Jeddah, Saudi Arabia.

al Otaibi told iMediaEthics by e-mail that he only learned his photo was being mis-labeled through social media. He was worried that it could be used for propaganda.

Earlier in January, al Otaibi also posted images of the boy preparing to pose for the photo (below).

In another photo on his Instagram, the boy is shown sitting up, smiling and making the “peace” sign in between the stone piles.

Doornbos traced the photo being mislabeled as a Syrian image back to Saudi Arabian tweeter @americanbadu, who boasts more than 187,000 followers.

Also, the Twitter account for Syria’s opposition leader Ahmed Jarba tweeted — but quickly deleted — the photo, according to The Foreign Policy blog and Iran’s Press TV.

Jarba’s tweet showed the photo and read: “#ChildrenOfSyria are orphaned by Assad’s brutality. 5m chilren affected by crisis. This number has tripled in a year.” But, again, he deleted it.