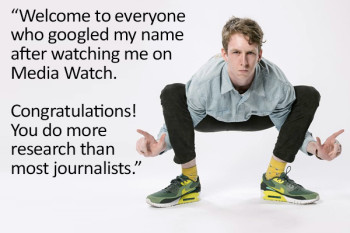 Australian Broadcasting Corp. radio host Triple J Hack was just the latest to be hoaxed by a prankster who boasts that he has duped the media four times in the past six months, ABC’s Media Watch reported.

The hoaxer, Lewis Spears, tricked Triple J Hack by posing as a guy dating his step-sister. Triple J Hack had posted on Twitter  March 31 that the show wanted to interview “someone who’s dated their step-sister/brother.”

Triple J Hack’s website says it is “shoving the ‘j’ into journalism.”

Step-sibling love… is it real? @triplejHack are looking for someone’s who’s dated their step-sister/brother? Can be anon. hack@abc.net.au

Spears responded and was featured in a four-minute interview for an April 16 radio show where he said he was 20-years-old, named Alex, and dating and in love with his stepsister Jay, Media Watch said.

Media Watch noted that the radio show could easily have avoided being duped because a quick Google search for him would have tipped journalists off that he may be a suspect source.

Spears’ Facebook account identifies him as an “amateur comedian” and “cyberbully superstar.”  His Twitter account reads: “Labelled the worst cyberbully in Australia by A Current Affair, but I don’t think I’m that bad of a guy really. My debut live show is on sale now!”

Spears told iMediaEthics he pranks the media “for fun,” “because it’s easy” and because maybe it will prompt people to be more skeptical of the media. “When I think about it, getting fake stories on the news/televsion/radio is a favorite pastime of mine. It’s very easy, which works well for me because I’m very lazy,” Spears wrote. “And I don’t think it should be.”

“To give you an example, this is the fourth time in 6 months I’ve been in the news for a made up story,” Spears added. “I don’t even use a fake name anymore. I used to, but then it got too hard to keep track of all the fake articles and I realized that most journos never factcheck, let alone Google people.”

He pointed iMediaEthics to an article in the Age quoting him and Today Tonight being duped.

Spears said he hasn’t heard from Triple J Hack since it learned it was duped.

Beyond basic fact-checking, Spears suggested a source-check program to help journalists avoid being hoaxed by people like him:

“I think there should be an automatic program similar to spellcheck installed on all journalists computers. Whenever you type the name “Lewis Spears”, a message should pop up that says ‘Are you sure he’s not lying?'”

He went on: “In a world where the media influences the public so much, it’s alarming to see how little research and fact checking goes into stories. If I can get nationwide coverage and publicity by lying to one journalist over the phone for ten minutes, imagine what someone with a more sinister goal could do.”

Spears won’t stop pranking anytime soon. “I’m going to continue to get on the news with fake stories until every journalist in the country can recognize my voice over the phone or they actually start doing their jobs,” he wrote.

Welcome to everyone who googled me after watching @ABCmediawatch. Congrats. You do more research than journalists. pic.twitter.com/EEu4TJVY2b
— Cyberbully Superstar (@LewSpears) May 4, 2015

I’m going to be on Media Watch tonight. It’s about the fake story I tricked Hack on triple j into broadcasting… http://t.co/XcSCptfYQ7

Meanwhile, Triple J Hack’s executive producer Alex Lollback defended its lack of skepticism. “We had no reason to think “Alex” was intentionally trying to mislead our reporter,” he told Media Watch.

Further, Lollback said the show “won’t stop involving our audience” despite the hoax.

On April 20, Triple J Hack’s Tom Tilley admitted being duped. “We’ve since discovered that Alex’s story was made up and we were lied to,” he said.

iMediaEthics has written to Triple J Hack for comment.