Holy Areola! Should the NY Times use pasties next time for its front page

Holy Areola! Should the NY Times use pasties next time for its front page breast photo? 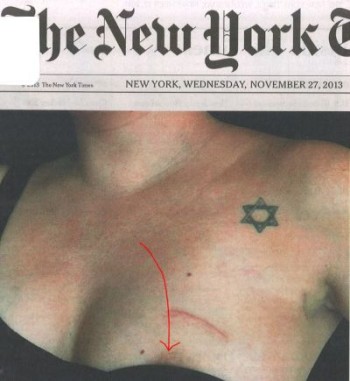 Sensationalism at the New York Times? Why else would the Times photography editors select a peek-a-boo shot of a woman breast cancer victim dropping her top and showing her upper areola?

We asked the Times if it expected accusations of sensationalism in response to the photo. Times spokesperson Danielle Rhoades Ha sent iMediaEthics statements from the Times‘ photo and design directors. They are:

The image’s caption (from the print version) describes a “Tel Aviv woman who found a lump in her breast. Cancer-causing gene mutations are common among many Jews in Israel.” The photo credit cites “Rina Castelnuovo for The New York Times.”

iMediaEthics scanned in the print version of the photo

The online version of the image, like the print version, is large. The print version is 4 columns wide, whereas the online image is an eye-popping, 945px × 630px size image with a different caption.

The online photo caption states: “This 28-year-old woman discovered a large lump in her left breast last year. Years earlier, her mother’s half-sister, who lives in Canada, tested positive for a genetic mutation that increases cancer risk and then warned her Israeli relatives.”

See the online version of the photo. (Credit: NYT, screenshot)

The Times’ Tom Bodkin defended the photo choice telling the Washington Post that “it was an ‘extremely appropriate’ choice.”

“The meeting on today’s front page, says Bodkin, looked over a number of photographs, including images that were displayed on the inside pages for the piece. There was a “fairly unanimous consensus” around the photo that prevailed, he says.”

It shouldn’t go without notice that there is also a photo in the online version of a topless woman who has undergone breast reconstruction The caption reads:

“Removing the breasts sharply reduces the risk of cancer in women with genetic mutations. Still, mastectomies are disfiguring and after breast reconstruction, women often experience numbness. Above, after a double mastectomy and reconstruction.Rina Castelnuovo for The New York Times”

The Times apparently chickened out and didn’t publish the bare-breasted photo in the print edition. There were a total of four photos in the print version of the story–three on page A10 where the story continues from the front page. See below the photo that the Times only published online.

This photo accompanied the online version of the article but not the print version.

iMediaEthics still wonders why editors in charge of the front page would allow treating such a serious subject as breast cancer genetics as if it were titillating cheesecake, instead of a news story.

Holy Areola! Should the NY Times use pasties next time for its front page breast photo?

NYTimes Didn't Disclose Airbnb Financial Conflict of Interest, Public Editor Says It Should Have...
Whoops! The moon isn't a planet