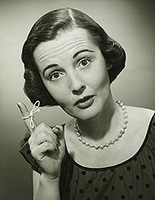 WHAT FACTS?: Houston Chronicle’s Austin Bureau Chief Clay Robison wrote that he didn't remember a fact that would have taken only minutes to look up. About.com states that "Americans 'tie a string around their fingers' to remind them of something." Should this technique be added to journalistic methods? (Getty)

In his January 25 column, Robison wrote (emphasis not original): “So, Sen. Dan Patrick, R-Houston, files a bill to prohibit — guess what — straight ticket voting in judicial races. It won’t pass. But it reminds me that Republicans took over the courts in Harris County in 1994 in a similar straight ticket sweep that unseated many Democratic judges. I don’t remember if any Democrat filed a similar bill then. If so, it obviously didn’t pass either.”

As Crow wrote, “It wouldn’t have been too hard for Robison to have an assistant check to see whether or not said bill had been filed back in ’96.” It is reporters’, or columnists’, responsibility to do the necessary research before writing an article. Furthermore, as Bureau Chief Robison is held to a  higher standard because he sets the example for his staff.

It’s not only his staff that are effected . According to its Wiki entry, “The Houston Chronicle is the largest daily newspaper in Texas, USA. As of March 2008, it is the ninth-largest newspaper by circulation in the United States…Its web site averages more than 75 million page views per month.” With so many readers, it is imperative for reporters to do their homework!

Crow was surprised to see “I don’t remember” printed in a column, so he set out to prove that the information was attainable. “Fortunately, I did five minutes research during my lunch break and was able to find the following information: Turns out there WAS a bill filed in 1995 (just after the Democrats lost Harris County) HB 729. It was filed by (now retired) Rep. Anna Mowery a Republican from Fort Worth. She attempted to get the same bill passed in 1997, 1999, 2001, and then sat back in 2003 As Democratic Representative Pete Gallego filed a bill addressing the same. In 2005 and 2007, no bill with that specific heading was filed, but there were several filed whose intention was the creation of non-partisan elections in certain judicial races…”