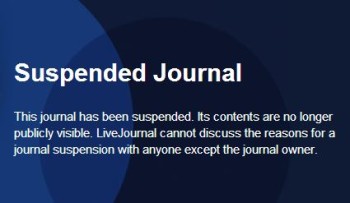 Many media outlets pulled quotes or photos from Marina Krim's Live Journal page. The page has since been suspended. (Credit: Live Journal, screenshot)

How should news outlets handle photos of the Upper West Side family the Krims, whose personal tragedy has made national news? As has been much reported, mother Marina Krim returned to the family’s Upper West Side Manhattan home this past week and found two of her three children dead and the family’s nanny wounded.  New York City Police Commissioner Ray Kelly is quoted as saying “the nanny began to stab herself as [Krim] entered the bathroom.”

Some outlets, like the New York Daily News and Newsday, have blurred the face of the family’s surviving child, therefore helping protect the child’s privacy.  But others including the New York Post, Gothamist and DNA Info didn’t.  Compare below the Daily News’ and Post’s front pages from Oct. 27.

(iMediaEthics is using screenshots of the photos and coverage in question because they are the subject of this report.)

New York City blog Gothamist posted a photo of the three children — without a caption credit, by the way — sitting around a table.  The photo, below, isn’t blurred.

It appears that the photos of the children that Gothamist used were pulled from Krim’s Live Journal, as an earlier post credits the images. iMediaEthics has written to Gothamist’s editor Jen Chung asking why subsequent uses of the photos aren’t captioned or credited and why Gothamist decided to run unobscured photos.

“LiveJournal cannot discuss the reasons for a journal suspension with anyone except the journal owner.”

DNA Info, a “New York neighborhood news” site, published a slideshow of photos pulled from Facebook, WeddingWindow.com, and Krim’s Live Journal, along with its reports on the crime.  Photos were not blurred, and iMediaEthics has asked DNA Info why.

The New York Post also cited posts and photos from the Live Journal in its coverage, and the New York Times quoted from the blog.  And The New York Times has  corrected one of its reports to fix its inaccurate reporting on the “ages and sex of the children who were killed.” That correction reads:

‘An earlier version of this article misstated the ages and sex of the children who were killed. They were 2 and 6 years old, not 3 and 5. And one was a girl; they were not both boys.'”

The Society of Professional Journalists’ Code of Ethics‘ Minimize Harm section has a handful of tenets that relate to this story.  The SPJ reminds journalists to

The Dart Center for Journalism & Trauma, “a resource for journalists who cover violence,” addresses reporting on children, violence, and crime. For example the report “Covering Children & Trauma: A Guide for Journalism Professionals” by Ruth Teichroeb, advises:

“When children are victims of violence, journalists have a responsibility to report the truth with compassion and sensitivity.  Kids aren’t mini-adults; they deserve special consideration when they end up in the news.”

iMediaEthics has written to the Dart Center executive director Bruce Shapiro and SPJ Ethics Chairman Kevin Smith asking how they advise media outlets to report sensitively on this case.  iMediaEthics also contacted the Daily News and the New York Post  to learn if either has a policy for reporting on or publishing photos of children in crime stories, and to learn why they handled the photos of the children how they did. We will update with any responses.