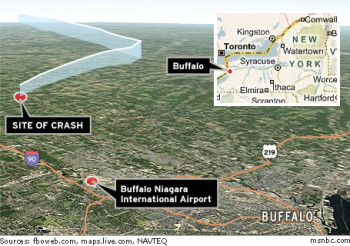 Were the pilots, captain Marvin D. Renslow and first officer Rebecca Lynne Shaw, at fault for leaving the auto-pilot on during icy conditions until the final moments of the deadly crash of Continental Flight 3407, February 12, 2009, in Buffalo, New York?

If you read the media headlines, such as The New York Daily News’ “Auto Doom: Experts say using Autopilot in icy weather sealed the plane’s fate,” Feb 16, or the lede in the Associated Press/MSNBC reports, Feb 15, following the tragedy that killed all 49 on-board and one person on the ground, you would naturally think so.

The AP lede stated, “The commuter plane that crashed near Buffalo was on autopilot until just before it went down in icy weather, indicating that the pilot may have violated federal safety recommendations and the airline’s own policy for flying in such conditions, an investigator said Sunday.”

However, in the Huffington Post version of the AP story, the pilot may have “ignored federal safety recommendations” instead of violating them.

Wow. Either way, it sounds like the pilots are to blame. The AP story continued: “ ’You may be able in a manual mode to sense something sooner than the autopilot can sense it,’ said Steve Chealander of the National Transportation Safety Board [NTSB], which also recommends that pilots disengage the autopilot in icy conditions.”

However, if you managed in all this blame-assigning verbiage, to make it as far as the 18th paragraph, the inconvenient and more complicated truth begins to emerge. It turns out that the issue about the autopilot being on during icy conditions is not, whole cloth, required by the Federal Aviation Administration (FAA).

According to the AP’s own story, “Federal Aviation Administration spokeswoman Laura Brown said the agency advises pilots to disengage the autopilot when ice is accumulating, but the guidance is not mandatory.”

Not mandatory? Then why does the lede paragraph blare that the pilots “may have violated federal safety recommendations” when paragraph 18 proves the AP reporter certainly knew the pilots could not violate something that isn’t mandatory?

What readers were missing in this and other early reports, slanted as they were by the ham-fisted suggestions of blame heaped upon the pilots, was really a disagreement between two federal agencies, the NTSB and the FAA.

The NTSB wants to have the FAA adopt the policy of always switching off the autopilot in icy conditions, whereas the FAA wants something more measured. So, when the lede paragraph stated that the pilots may have violated “federal safety regulations,” that sounds so ominous; the truth is they may have violated only the NTSB’s recommendation to the FAA—something the FAA themselves do not follow!

Shame on the AP and other media for giving the false impression of pilot error before all the facts are known.

With the messiness aired by the NTSB between itself and the FAA, I decided to call the Canadian manufacturer of the plane that crashed to ask what the Flight Operations Manual states about the Dash 8 Q400 Bombardier’s performance in icy conditions, as well as the Canadian counterpart of the NTSB, to find the truth.

John Arnone, of Bombardier Aerospace’s Media and Public Relations department, quoted the plane’s Flight Operations Manual over the phone. He read, “The autopilot may be used in all icing conditions except severe icing.” He continued, “Severe icing is defined as freezing rain, freezing drizzle and mixed icing conditions.” None of these weather conditions were advised that night. In fact, the pilots were informed to expect weather conditions of “light to moderate icing.”

Steve Chealander, the NTSB spokesperson, said in the Sunday press conference: “It was really not a bad weather day.” Pilots only reported later in the flight that “significant icing” had occurred—not severe or “deadly accumulation of ice on some critical flight surfaces, according to federal investigators” as the Wall Street Journal incorrectly reported in their lede, Feb 15. “Thus far we haven’t determined that it’s severe icing. So far, we see that everything seemed to be normal in using the autopilot,” Chealander said.

I called the NTSB for comment and asked, “Did you ever at any time state that the plane had “deadly accumulation of ice on some critical flight surfaces.” Keith Holloway, the NTSB representative said, “No, we did not.” Then why did Wall Street Journal state this erroneous and inflammatory statement in their Feb. 15th lede? So I emailed WSJ to ask. They apparently don’t care that their lede’s sensational “fact” –presented as common knowledge– can not be verified. They simply said they “stand by” their story.

So who is publicly standing up for the pilots?

Dyanne Beauvalet, spokesperson for Transport Canada Civil Aviation, said they are restricted in the ongoing investigation and can not speak directly about the crash as NTSB is in charge. She is part of the Canadian version of NTSB, who responded to StinkyJournalism by phone and email. She did confirm, however, that “The Bombardier Q400 is certified to operate in icing conditions with or without the autopilot engaged, however normal procedures call for the autopilot to be disconnected during flight in severe icing.”

Other news outlets, like CBC News in Canada, got the facts right on Feb 15. CBC’s sub-heading was “Latest info suggests decision to use autopilot didn’t break rules” Why didn’t AP or The New York Daily News run such a headline?

Newsday clarified the autopilot issue by Feb 17, reporting, “Because the airplane that crashed was on autopilot as it descended, the icing issue has exposed a rift between the NTSB, which advises pilots to fly manually in conditions producing even ‘thin amounts of ice,’ and the Federal Aviation Administration, which says aircraft are safe on autopilot in ‘light to moderate icing.’ Changing FAA icing certification standards is one of the NTSB’s ‘most wanted’ safety recommendations.”

Newsday quoted FAA spokeswoman Laura Brown who said that Flight 3407 pilots “appeared to have followed FAA and manufacturer guidelines for light-to-moderate icing. ‘So far, I don’t think we’ve seen anything that would cause us to re-examine’ FAA policies, Brown said.”

Instead of waiting for the facts to come in, the ever hungry media monster has moved on from speculations of blame regarding icy conditions and the pilots “may be” wrong for leaving the autopilot on, to the next speculation. It is now the “pilot commands” that “likely” caused the crash, according to the Wall Street Journal, as posted on Fox News. The Wall Street Journal’s reporters do not say which commands or even explain what pilot commands are. That’s not important, apparently. The sensational message—that the pilots “likely” erred—is what sells newspapers and creates web hits. But all of this comes at the expense of the families of the crew, who have to endure such inaccurate speculation painfully masking itself as journalism.

The lede on the Wall Street Journal’s follow-up story of February 18 stated, “Investigators examining last week’s Continental Connection plane crash have gathered evidence that pilot commands—not a buildup of ice on the wings and tail—likely initiated the fatal dive of the twin-engine Bombardier Q400 into a neighborhood six miles short of the Buffalo, N.Y., airport, according to people familiar with the situation. The commuter plane slowed to an unsafe speed as it approached the airport, causing an automatic stall warning, these people said.”

“These people said”? Who are these people “familiar with the situation”? How do Wall Street Journal editors allow anonymous sources of unknown origins, qualifications or rank accuse innocent pilots before the facts are known? Since WSJ told me that they stand by their story, I will have to ask the families of captain Marvin D. Renslow and first officer Rebecca Lynne Shaw what they think.