"I live in a 'terrorist house'" article unpublished by Guardian, under investigation by reader's editor - iMediaEthics

“I live in a ‘terrorist house'” article unpublished by Guardian, under investigation by reader’s editor 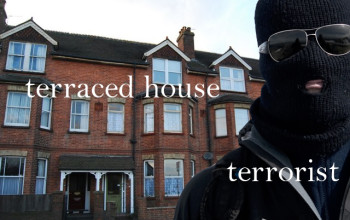 The Guardian is reviewing an article that reported police investigated a young British Muslim boy after he wrote that he lived in a “terrorist house,” even though the boy meant “terraced house.

“I live in a ‘terrorist house’: police speak to Muslim boy, 10, over spelling error,” was the headline on The Guardian‘s Jan. 19 story that has since been deleted by the newspaper.

According to the now-deleted Guardian article, the young boy wrote in a school assignment he lived in a “terrorist house” but meant to write “terraced house.” The article stated: “His teachers did not realise it was a spelling error and instead reported the boy to the police, in accordance with the 2015 Counter-Terrorism and Security Act, which states that teachers are obliged to alert the authorities to any suspected terrorist behaviour.”

A note in place of The Guardian article in question, visible on Jan. 21, reads: “This article has been taken down pending investigation.”

A Google search for the Guardian article produces it (Credit: Google , screenshot)

Guardian readers’ editor Chris Elliott wrote on Twitter in response to a question by JT Cassidy that “We are investigating a complaint about several aspects of it and we feel we need to check it out properly before we can restore.”

The Guardian published a separate story reporting that “police have criticised the BBC for publishing a story” about the claim the police investigated the boy and his family over the spelling mistake.  Lancashire Constabulary’s police and crime commissioner, Clive Grunshaw, is quoted by The Guardian as complaining that the story was sensationalized and inaccurate and the BBC knew this in advance.

“This was not responded to as a terror incident and the reporter was fully aware of this before she wrote her story,” he is quoted in part as saying. The BBC stood by its story, saying that “We reported the facts in good faith and after taking appropriate steps to check them with the authorities involved.”

The Guardian noted in that story: “The Guardian’s report of the initial story has since been taken down and is under investigation by the readers’ editor.”

iMediaEthics has asked Elliott for more information concerning this story and review and if the story was taken down because of concerns about accuracy or sensationalism.

This note was posted in place of an article on Jan. 21 (Credit: Guardian)

“I live in a ‘terrorist house'” article unpublished by Guardian, under investigation by reader’s editor