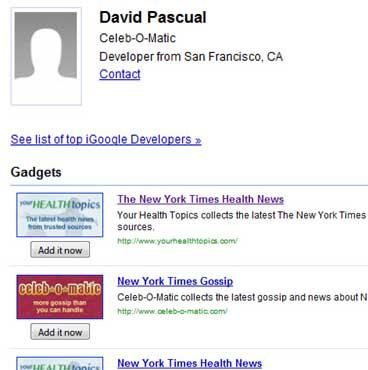 Above is an illustration showing an iGoogle profile of developer David Pascual whose hard work has somehow led to the hijacking of news organization trademarks to drive traffic to unrelated celebrity, sports, and health sites. Before the take-down resulting from StinkyJournalism's investigation, people were tricked by Pascual's gadget. They thought they were signing up for mainstream media brand headline news feeds on their iGoogle page--they weren't.

The faceless man above has been outed by iMediaEthics. His name is David Pascual, and he is the person behind a ploy to exploit legitimate news content by tricking unwitting iGoogle members to sign up for news headlines directed to his sites instead of the legitimate news agency.

Pascual is the developer whose gadgets–such as Celeb-O-Matic.com–“borrow” legitimate newspaper and network names in order to misdirect traffic from these media outlets to his own “link farm” sites. From USA Today to the New York Times, the brand names of authentic media were slapped on iGoogle gadgets with news categories–health, gossip, finance  and sports–in order to steer traffic to fake websites, set up solely to maximize profits from advertisers.  imediaethics’s investigation has resulted in the wholesale removal by the developer of these deceptive gadgets from iGoogle. Pascual writes to imediaethics: “All the gadgets in question were promptly disabled as soon as this issue came to my attention.”

iMediaEthics discovered that this traffic-poaching scheme went way beyond the New York Daily News, which was the instance we initially reported had been hijacked. After notifying Google about the hijacked headlines of the Daily News, the newspaper contacted Pascual, who then told imediaethics that he immediately complied with the take down of the trademark-violating Daily News gadget as well as many other with bogus media outlet branding.

The scheme went well beyond the New York Daily News. We signed up for all sorts of these fake iGoogle’s news feed gadgets. Among these was the Boston Globe.  Several fake Globe gadgets –sports, health, sports and finance–pretended to offer us boston.com content. As it had been with the New York Daily News, “Boston Globe Health News” or “Boston Globe Sports News” headlines both led to a series of sites that had nothing to do with obtaining The Boston Globe news feed. It was the old bait-and-switch.

We then signed up for “NYTimes.com” headlines. Again, the Pascual gadgets led to dummy sites–not The Times news feed or Web site. “New York Times Gossip”, anybody? How about  “New York Times Crosswords Daily Technology” , “New York Times Finance News”, and “New York Times Health News” ? Signing up for any of these gadgets proved to be yet another sham.

Once we informed the New York Daily News of the deception, every other newspaper that we found had fallen prey to the same piracy last week has since been cleansed. The various gadgets have been disabled, just as Pascual informed us , and now provide an error message , as illustrated below, instead of phoney headlines.

The Developer And His Catch

The man behind the curtain, David Pascual, seems at first blush to have exploited iGoogle’s Gadgets pretty well for as long as it lasted.

Although most people accused of online trickery would sooner chew on rusted nails than chat with a media watchdog, Pascual (now living in Paris, France and working for a different company) to his great credit responded to some of our questions through e-mail. He claimed the articles on Celeb-O-Matic websites gadgets are news aggregations gadgets that source legitimate stories taken from the original media sources it names–such as the New York Daily News.

Pressed about the resulting deception when selecting the iGoogle gadget for the New York Daily News, Pascual accepted a lamb’s share in the wrongdoing. He suggested that only a few gadgets that had “slipped through” were misleading. Here is his statement:

“There was never any intention of misleading the end user or infringing on any trademarks, and the gadgets in question only drove a tiny amount of traffic to the aggregation sites, none of which are profitable.  As soon as the issue was pointed out, any gadgets that could lead to confusion were promptly disabled.  If you find any other problematic gadgets in the directory that have not yet been disabled, please let me know and they will be disabled immediately (you have to install them on your iGoogle page to see if they are disabled or not).  Disabling the gadgets in question is the only thing I can do from my end to remedy the situation.”

But our investigation clearly found more than a few misleading gadgets. In fact, we stumbled onto a surprising array of famous media  name brands that Pascual’s gadgets were poaching. We compiled a list of screen shots that show what these gadgets offerings looked like on an “Add Stuff” iGoogle page. Here are more examples in addition to  The New York Times. and The Boston Globe: The Chicago Tribune, The San Francisco Chronicle, USA Today,    The Wall Street Journal , The Miami Herald and The Los Angeles Times.

If you go to the directory of news gadgets now and try to add the fake gadgets, you get an error message. Pascual said that he hopes Google will delete the list so the gadgets totally disappear, to wipe the slate clean. “I am waiting on Google to remove them from the directory entirely,” Pascual said. After imediaethics’s investigation into the hijacking of news media brands, Pascual’s fake iGoogle Boston Globe news feed gadget–and all the others, including The New York Daily News and The New York Times–are now defunct. Image above shows an error message that now appears after trying to select one of Pascual’s Boston Globe news headline gadgets.

What about Google? After bringing this case to the company’s attention, a Google spokesperson informed us that media companies like the New York Daily News “can file a notice of infringement referencing the alleged gadgets…” The details on how to file grievance is laid out in their Infringement Notification for iGoogle and Gadgets.

Pascual declined to entertain any more questions after the first email exchange. Hopefully, we won’t have to contact him again.