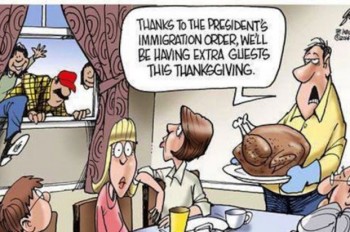 The Indianapolis Star apologized for an offensive Thanksgiving cartoon this weekend.

The cartoon, created by Gary Varvel, showed a family climbing through another family’s window to crash Thanksgiving. The caption read, “Thanks to the President’s immigration order, we’ll be having extra guests this Thanksgiving.”

The family climbing into the window appeared to be Latino, the Huffington Post reported. Then after criticism, the Star changed the cartoon to remove a mustache from the man climbing in the window. See below a comparison.

The Case of the Mysterious Mustache: the original @indystar cartoon by @varvel & the edit pic.twitter.com/NRDUAkSASx

Next, the Star unpublished the cartoon.

And finally, the Star apologized in a letter from executive editor Jeff Taylor admitting “we erred in publishing” the cartoon.

Taylor defended the cartoon against the accusations of racism but acknowledged “many” readers thought it was racist.

The cartoonist “did not intend to be racially insensitive in his attempt to express his strong views about President Barack Obama’s decision to temporarily prevent the deportation of millions of immigrants living and working illegally in the United States,” Taylor wrote.

Taylor went on to argue that the cartoonist Varvel didn’t expect readers would “read literally” the cartoon but instead see it as the conservative perspective on Obama’s immigration position.

“Varvel has been the editorial cartoonist at the newspaper since 1994, and his work is nationally syndicated through Creators Syndicate,” the New York Times reported.

Even though the Star unpublished the cartoon Taylor said the newspaper stands by Varvel.

“This action is not a comment on the issue of illegal immigration or a statement about Gary’s right to express his opinions strongly. We encourage and support diverse opinion. But the depictions in this case were inappropriate; his point could have been expressed in other ways.”

iMediaEthics has written to the cartoonist Varvel for comment.

This year alone numerous news outlets have gotten in trouble for cartoons.

Earlier this month, the Toronto Sun was slammed for its cartoon of then-mayoral candidate Olivia Chow, who moved to Canada from Hong Kong, with slanted eyes in a Mao suit.

Last month, the Boston Herald apologized for a cartoon of President Obama being asked about watermelon toothpaste.

The New York Times also apologized after getting complaints that a cartoon it published about India was racist.

And in August, the Sydney Morning Herald retracted a cartoon about Gaza that prompted complaints of racism.