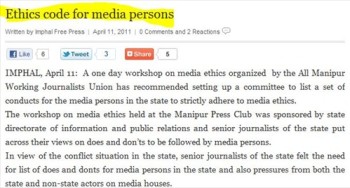 An Indian journalists group is calling for a code of ethics to be established, Kangla Online reported.

The group — the All Manipur Working Journalists Union — hosted a media ethics workshop at the Manipur Press Club, which led to the recommendations for a media ethics code. The union has created a model version based off the Press Council of India’s code. Read more here

As iMediaEthics has reported, “paid news” in India is considered a serious problem in journalism.