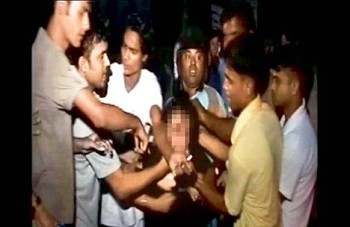 An Indian TV reporter videotaped a teenager being beaten, stripped and sexually attacked, and his station later aired some of the footage. Reuters reported that the girl was attacked “for more than 30 minutes until passersby and police rescued her.”

The station, News Live, has defended its taping and publication.  News Live’s managing editor Syed Zarir Hussain explained how the station got the footage, writing that an “off-duty reporter,” Guarav Joyti Neog, was in the area, started taking a cell phone video of a “brawl,” and contacted the station. Within “10 to 15 minutes,” the station’s Dipya Bordoloi and a cameraman showed up and the girl began being attacked.  Hussain wrote:

“The two reporters did try to rescue and pacify the mob of around 30-odd people (cameraperson Jugal’s tape has evidence of how our two reporters tried to save the girl, asking people not to beat her.). But our three News Live crew were outnumbered by the violent beastly mob….it was a free for all and the helpless girl was stripped and everyone, some young and old, started touching her private parts, all captured on tape.

“Police arrived at the spot some 30 minutes after the incident (cannot be sure if the News Live phone call was the first call received by police or someone else called up earlier than us).”

He wrote that the station decided to air immediately “some not very disturbing visuals” in a “20-second clip” of the “girl being rescued by the police.”   The next day, “there was debate in the Newsroom whether or not to air the visuals” and “we made conscious editorial decision to telecast the news with the sole intention of fulfilling our social responsibility of showing the viewers the seriousness of this beastly act and [at the] same time help police to identify the rapists.”

Hussain noted the station didn’t just turn the footage over to the police because “we thought the police would simply put it in the cold storage.”  He further defended airing the video, writing:

“Questions were asked as to our journalistic ethics. I would say our reporters and camerapersons did the right thing under the circumstances. They did try to rescue and pacify first, but then they were outnumbered and hence instead of shutting the camera they did the right thing of rolling it.

“Today, people across the nation, including Assam Police chief Jayanta Choudhury, have gone on record thanking News Live for filming the incident.”

Neog, the News Live reporter who told the station about the “brawl,” resigned in mid-July, according to India’s NDTV.  Neog “has been accused of ‘planning and directing’ the ghastly mob attack” on the girl, NDTV reported.  Neog defended his actions an said “I strongly deny and refute the allegations as malicious and wild.”  Neog also said he is stepping down and “will cooperate with the investigation process” but “would like to come back and join the organisation again with my head held high.”

The station’s executive director Nitumoni Saikia also defended Neog against charges of being involved in the attack, the Hindustan Times reported.

News Live’s Dipya Bordoloi, who taped the attack, said he “called the police immediately on reaching the spot, but they took about 20 minutes to reach,” but the police’s Jiban Barua said it was told about the incident by a hotel owner – not the media – and “reached the spot within five minutes,” Reuters reported.

News Live’s editor in chief, Atanu Bhuyan, defended taping and airing the video, according to the Daily Mail. Bhuyan is quoted as saying:  “We shot the visuals so that the culprits could be identified. You all are talking about it because we showed it to you and shook you out of your comfort zone. Why blame us?”

The International Federation of Journalists issued a press release July 16 “calling for full disclosure of the circumstances” that led to the video.  The IFJ Asia-Pacific said it is “shocked and distressed at this incident.”

“Journalists are members of civil society and it is their duty to observe decency and not be mere spectators when they encounter any preventable crime. Media persons should understand that human lives and honour are more important that increasing television ratings or circulation.”

According to the Hindustan Times, four of the people accused in the girl’s attack have been arrested.

We have written to News Live for more information about this incident and will update with any response.

We wrote in May about a similar case in South Africa.  The Daily Sun published images from a graphic video picturing the gang rape of a kidnapped mentally ill teenaged girl.  A “concerned resident” brought the video to the newspaper, which used the video and also brought it to police.  The newspaper defended its publication because after it published front-page photos of the girl, someone recognized her and notified the police.  The Daily Sun said the girl’s mother gave the newspaper the OK to run her image, but Media Monitoring Africa criticized the Sun for “using and emphasising the ends to justify the means.“

UPDATE: 7/17/2012 10:05 AM EST: The Hindustan Times reports that News Live’s editor-in-chief Atanu Bhuyan resigned today.  “Such comments may put a pressure on the management of the channel, which is still supporting me, and it in turn may pressure me in the future. Therefore to avoid such a situation I have decided to resign,” Bhuyan is quoted as saying.  According to the Hindustan Times, Bhuyan still defends the video recording.