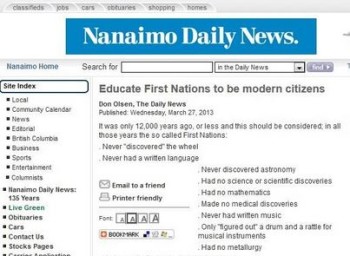 Indigenous people opened their newspapers last week in Western Canada to read, in a letter from a reader, that their race “never had a written language,” “made almost no inventions” and “have a history that is notable only for underachievement.”

The Nanaimo Daily News faced heavy reader criticism, a protest and 118 complaints to the press council over a rant published as a letter to the editor about indigenous people. The Daily News is based in the city of Nainamo on Vancouver Island in British Columbia, Canada.

The newspaper ended up unpublishing the letter from its website and apologizing after Nanaimo’s mayor, readers, and First Nations leaders protested, calling for a prominent apology and firings, according to CBC.

The letter, submitted by reader Don Olsen, was titled “Educate First Nations to be modern citizens” and threw a blanket of criticism over indigenous people.  Olsen’s letter, republished on Metro News’s website, listed 15 claims about First Nations people including that they “are just in the last 200 years getting caught-up to most of the rest of the world.”

While 118 complaints were filed with the British Columbia Press Council over the letter, executive director Rollie Rose explained to iMediaEthics that letters to the editor are exempt from the complaints process because newspaper staff didn’t provide the content. Rose wrote:

“Canadian Press Councils consider all complaints against a published Code of Practice which clearly states  because letters to the editor are not written by journalists, they are not subject to the code. The complaints policy further states newspapers have sole responsibility for the content of letters they publish or do not publish. There is only one press council in Canada that does not operate within a Code of Practice.”

Therefore, editors are squarely held responsible for their choice to publish the letter.

Nanaimo Daily News publisher Hugh Nicholson issued several mea culpas for the letters. He apologized to protesters saying it was “unfortunate” that the letter was published and that “it should not have ran.”  Separately, he called the letter’s publication a bad “judgement call.”  Further, The Globe and Mail quoted Nicholson as saying the incident was a result of “human error” because “people are rushed for time” and “mistakes happen.”

In addition to Nicholson’s apologies, the Daily News posted an “Editorial Clarification” on its website March 29.  The clarification again apologized for the letter and distanced the paper from Olsen’s comments. It read:

“In the Wednesday edition of the Nanaimo Daily News, a letter to the editor ran from Mr. Don Olsen, which has caused considerable concern among some of our readers.

“While we would defend Mr. Olsen’s right to hold and express his opinion, the sentiments expressed were entirely his own and in no way reflect the views of the newspaper.

“The letter should not have run.

“We apologize for any distress this may have caused our readers.”

The Nuu-chah-nulth Tribal Council told iMediaEthics that because of this incident, it has decided to stop using the Daily News’ printing service.  “We used their service to print our bi-weekly First Nation paper, called the Ha-shilth-sa,” council president Cliff Atleo wrote in an email to iMediaEthics.  “We have scaled back to once a month recently. We will no longer use their service for the print.” According to Atleo, the council has found another printer.

Valerie Alia, a writer and editor and professor emerita of ethics and identity, called for the newspaper to do more to educate the public and report accurately on First Nations people.  “It’s not just about hurt feelings of a few First Nations people,” Alia wrote in an email to iMediaEthics.  “It’s about continuing harm.”

She points out that the editor, Nicholson, “does not say anything about correcting the rampant errors, or publishing alternative views and accurate information.”

“Whether he likes it or not,” she continued, “the newspaper is a vehicle of public education. If deadline pressures mean editors don’t read the copy they publish, he needs to hire new editors. It’s an outrageous admission, that his paper publishes copy the editors haven’t read!”

Alia added that The Daily News’ Nicholson’s apology wasn’t good enough. The letter’s publication “amounts to hate speech,” according to Alia. “The ethicist Johan Galtung would call it a form of ‘structural violence,’ which can ultimately lead to direct violence.”

“His online comments avoid the real issues,” she wrote, “and trivialize the concerns.”

Alia comments, “If there were so many letters to choose from, why would the editors choose this one? His excuse implies that the editors published the letter without actually reading it. That doesn’t say much about their professionalism or journalistic integrity.”

She also points to the letter as “blatantly derogatory,” with a “patronizing and misleading headline,” “Educate First Nations to be modern citizens.”

The council isn’t satisfied with the newspaper’s apologies and hasn’t had any discussion with the paper or Olsen over the letter, Atleo told iMediaEthics.

Alia called for the newspaper to do more to educate the public and report accurately on First Nations people.  And Jody Wilson-Raybould, the regional chief for the British Columbia Assembly of First Nations, advised for the paper to do reporting on indigenous peoples in light of this incident, according to the Times Colonist.  “I would strongly suggest the Nanaimo Daily News run a series of well-researched and considered articles on historical and contemporary indigenous peoples’ issues for the benefit of its readers,” Wilson-Raybould said.