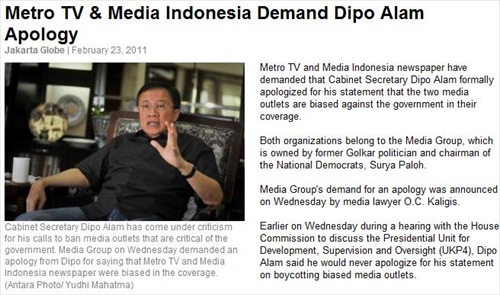 In late February, Indonesian Cabinet Secretary Dipo Alam called for the government to boycott advertising in “media outlets that were critical of President Susilo Bambang Yuhoyono,” specifically newspaper Media Indonesia and TV stations Metro TV and TV One, the Jakarta Post reported.  Dipo also said the media shouldn’t give “information” to those outlets.

He stated that he wouldn’t apologize for the boycott threat, even though Media Group, the parent company for Metro Indonesia and Metro TV, said they would “seek to charge [Dipo] for violations of the press law and freedom of information law” if he didn’t apologize.

In response, Dipo stated: “No pardon. No apologies.”

The Indonesian Press Council called on Alam to “clarify his recent alleged threat” to learn if it was on his behalf or behalf of the government, according to the Jakarta Post.  Dipo’s response was that they were “his personal views.”

The Jakarta Post reported that Metro TV and Metro Indonesia’s lawyer O.C. Kaligis reportedly said that Dipo “could be charged with articles in the 1999 Press Law and the 2008 Freedom of Information Law.

“The offences carry a maximum sentence of two years imprisonment and Rp 500 million in fines,” Kalagis is quoted as saying.  Kalagis called on Dipo to issue a retraction and public apology within 72 hours, the Jakarta Post reported Feb. 24.

Dipo responded that he was “ready to face legal charges.”  Dipo is quoted as saying:  “Every statement and action carries its own risks. I am ready if [they] sue me.”

The Media Group reported Dipo to the police Feb. 26 for his boycott threat.  The Media Group’s lawyer reportedly filed the suit  because Dipo never “responded” to its complaint.

Along with the police complaint, The Media Group “filed a civil lawsuit against Dipo, demanding Rp 101 trillion in compensation for potential losses incurred by the statements.”

But, on Feb. 28, Dipo’s lawyer, Amir Syamsuddin. ended up filing a complaint with the Press Council accusing Metro TV of defamation.”

“Dipo’s lawyer Amir Syamsuddin said Metro TV misused its authority and breached professionalism as a press outlet. Amir highlighted that the misuse of authority and the breach of professionalism could be seen in the running text that had been aired by the TV station for days, in which Metro TV reported that Dipo refused to apologize for his statement on boycotting the media.”

“This is a misuse of authority by the television station. It is clearly against the code of ethics of journalism. They have misused information that could create public opinion of Dipo as the enemy of the Indonesian press. Dipo has never placed himself as the press enemy,” Amir reportedly said.

Jakarta journalist Armando Siahaan listed suggestions for the media in an article for the Jakarta Globe.

Among his suggestions, Siahaan included an idea that Dipo mentioned:  Media outlets should be separate from political bias.  According to Siahaan, “two of the country’s biggest television news channels are owned by tycoons-cum-politicians, Surya Paloh and Aburizal Bakrie, both senior members of the Golkar Party.”

“While it is not impossible for media organizations owned by politicians to be objective, it is imperative for readers and viewers to be able to judge whether there are possible political motives behind the news that they consume.”

“In both cases, the vital journalistic process of verification was sidestepped in lieu of profit-driven immediacy.” Other issues in the media include “media spin”  by way of word choice, context and misquoting.

“Once the media starts putting words into sources’ mouths or providing premature coverage without verification, how can people maintain the belief that the media is protecting them from the tyranny of the government, and not just protecting their own interests?” Siahaan questioned.