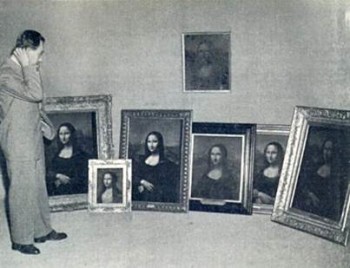 Deception has been a recurrent theme explored by iMediaEthics over the years. It comes in many flavors. We have, for example, examined photo doctoring, staged photos, media hoaxes, advertisements masquerading as editorial content, plagiarism, and complete fabrications, among many other deceptions.

A new exhibition, currently on view at the Michele and Donald D’Amour Museum of Fine Arts in Springfield, Mass., “Intent to Deceive: Fakes and Forgeries in the Art World,” brings many of these issues into sharper focus.

Though the exhibition, curated by art fraud expert Collette Loll and produced by Washington, D.C.-based International Art and Artists, deals with forgeries and fakes in the art world, it begs larger questions that touch on the media as well.

Perhaps the most disturbing part of “Intent to Deceive” is the realization that we only recognize the fakes and hoaxes AFTER they are detected.

Until they are discovered, many if not most fake pieces of art and journalism are taken on faith and accepted as “real.”

Journalism and art hoaxes, though similar in some ways, have many obvious differences.

A work of art is created by an individual in near complete solitude and without, at least in theory, any mandated rules other than a sense of aesthetics.

Journalism is created in a crowd, so to speak, necessitating sources (preferrably more than one source from each side of a contentious issue or event), verifiable facts, reliable data and accurate quotes all of which are presented in an organized and accessible manner to an audience wanting to be informed.

A journalist also has an editor, and sometimes more than one and, as a final checkpoint, a copy editor or page proofer. Fabrications, plagiarisms, thin sourcing, etc., face many chains of command before they can be unleashed into the world.

All an artist has to do is fool one person: the collector. More specifically, the artist has to fool just one collector who is in possession of large sums of money. However, when an art forger dupes a collector, only one person loses. When a journalist dupes an audience, everyone loses.

And yet, near daily and almost certainly every week, a major news outlet or media venue is caught with its collective pants around its ankles. This may be partly due to the thankless grind of a 24-hour, 7-day news cycle that demands ever more news and “content” while profit-seeking stakeholders demand more and more efficiency (read: staff cuts). But it would be a mistake to lean too heavily on that excuse.

The intent to deceive is something far larger than a few budget cuts.

The Hall of Shame

Among the rogues gallery of media deceivers in recent years have been:

Jayson Blair, who as a reporter for the New York Times filed at least 36 stories on the national desk during the years 2001-2003 that contained plagiarisms and complete fabrications.

Jayson Blair wrote a book about his deceit.

Patricia Smith, a Boston Globe columnist who regularly invented people, places, events and even quotations in her “human-interest” columns in the years 1991-1994.

Stephen Glass, who wrote investigative pieces for the New Republic from 1996 to 1998, most of which were created out of thin air, though he tried to cover his tracks by creating mock websites and voicemails for a fake corporation he was “investigating.”

There was even a major motion picture made about him, such was the infamy; his infamy, in fact, has followed him to this day. In late January of this year, the California Supreme Court rejected Glass’s request to join the state bar as a lawyer.

But these are just the most widely reported misdeeds, and this list could go on for pages. Nonetheless, iMediaEthics comes across accounts of similar deceptions in the media’s reportage of breaking events on a near weekly basis.
For example, within the last month, the National Enquirer reported, without verifying its lone source (who turned out to not be who he said he was), that the actor Philip Seymour Hoffman was having a homosexual affair at the time of his heroin overdose. Given that, in 1981, actress Carol Burnett was awarded $1.6 million in damages for a similar story fabrication by the National Enquirer, the damages that may ensue from this suit will be astronomically higher.

Collectively, these five con men forged a Who’s Who of Western art: Curran, Daumier, de Laszlo, Matisse, Modigliani, Dufy, Van Gogh, Picasso, Signac, Toulouse-Lautrec, de Vlaminck, Van Gogh and Vermeer, among others. They sold their forgeries as the real thing or, in the case of Landis, gave them away.

Portrait of a woman by Elmyr de Hory, ca. 1975,  in the style of Amedeo Modigliani

The one uniting characteristic of all these men was, curator Loll suggests, “contempt for the art world.” This contempt seems to have been even stronger than the desire to get rich, though the latter was certainly a consideration (de Hory and van Meegeren, in particular, lived like exiled potentates).

Unlike art rogues who must stay under the radar (after all, they aren’t saying the work is done by them), journalist fakers seek fame in addition to fortune from the glory of their tall tales that are pased off by them as real.

In the end, what art and journalism forgeries have in common is the failure of oversight by experts. So as much as we point the finger at the actual fakers, the editors in the case of journalism and curators and art dealers in the case of art, not only failed to detect forgeries and to protect the public from fraud, but many also profited from the fraud. Many in art and media have a stake, especially after having missed it, to cover up and not having the truth known due to the potential loss of credibility and embarrassment leading to financial and career loss.

Remember, as the movie noted, it was like pulling teeth to get Glass outed at the New Republic before the house of cards was allowed to fall from the Forbes reports. Had Forbes chosen not to fight to expose a reporter, he could still be there churning out the fakery. The same scenario applied to Jayson Blair at the New York Times. There was tons of resistance from, and protection of Blair by, the editors at the Times before the bricks fell down.

Shattered Glass is a movie about Stephen Glass and his deceptions. (Credit: IMDB)

Get Your Vermeers Right Here!

Arguably, the most fascinating of these art forgers is van Meegeren, who once said he would “revenge myself on the art critics and experts…” for their neglect of his original work. He specialized in Dutch masters, and before he was caught, he had sold $30 million worth of his forgeries. His work was good enough to fool the dealers, one of whom sold a van Meegeren “Vermeer” to the Nazi leader Herman Goring for millions of dollars. (This, of course, begs the interesting question: Does cheating a genocidal war criminal really constitute a crime?)

Two van Meegeren Vermeers are included in “Intent to Deceive,” one of which (“Head of Christ”) was sold to a shipping magnate. In addition to recreating Vermeer’s style, van Meegeren claimed to have discovered some biographical information about the elusive artist that suggested a “lost period” in his life, when such previously unknown works were created. This was, of course, based on scholarship that van Meegeren had himself fabricated! (Shades of Stephen Glass and his fake websites and fake corporations). Indeed, van Meegeren claimed that his fake “Girl with Blue Bonnet” was a Vermeer from this lost period, and the ruse worked. He sold it for a veritable king’s ransom.

For these fakes, van Meegeren used Vermeer’s “The Procuress” as his model. The actual “Procuress” by Vermeer now hangs in the Museum of Fine Arts in Boston…or does it? (Cue the Twilight Zone theme music)

Elmyr de Hory is probably the best-known of the forgers on view, having been the subject of Clifford Irving’s bestselling book Fake! The Story of Elmyr de Hory, the Greatest Art Forger of Our Time  and Orson Welles’ 1972 documentary film F For Fake (pot meet kettle; Irving himself later perpetrated one of history’s most brazen literary hoaxes with his fake “biography” of Howard Hughes). De Hory’s motive was largely egocentric, as he honestly believed that he “did” Matisse better than Matisse. He also “did” excellent Modiglianis and Dufys, which are on view in “Intent to Deceive.”

untitled, by Mark Landis, in the style of Paul Signac, no date

The only authentic de Hory painting included in the show is a self-portrait that, ironically, shows that he had an original talent.

Hebborn, an art restorer who could not resist the temptation to create some “masterpieces” of his own, was never prosecuted for his crimes. However, he did pay somebody’s piper, as he was beaten to death on a Rome Street in 1996. The murder remains unsolved, or perhaps has been allowed to remain unsolved.

Most recently, the forgeries of John Myatt and Mark A. Landis have come to light.  Landis was profiled last year by Alec Wilkinson in The New Yorker, an article that, like Irving’s book on de Hory, uncovered Landis’s elaborate deceptions. Not only did he paint fakes, he pretended to be a Jesuit priest and spent 25 years trying to donate his (self-created) masterpieces to 40 different museums. Because he never actually took any money for his forgeries, he has never faced prosecution, though Myatt spent a paltry two months in the slammer for his crimes.

Where Are the Experts Hiding?

Regardless of their motives, all of these artists, like media hoaxers, plagiarists and pranksters, fully intended to deceive their audiences.

Among the larger questions about the media raised by the art-focused exhibition “Intent to Deceive” are:

Ultimately, there is still no foolproof method for detecting art forgeries, despite all the advancements in technology and lip service paid to transparency. The rule of thumb, according to this exhibition, is to rely on “eye of the expert,” provenance of the work, and some technical analysis. Even so, forgers fool the experts and the science all the time. And now, according to a Feb. 22 article in the New York Times (“Collectors of Keith Haring Works File Lawsuit“), experts are becoming reluctant to “authenticate” works of art for fear of being sued.

Likewise, the media relies on “experts” to verify facts but many of these experts are mouthpieces for corporations or politicians who stand to benefit from having the full truth revealed to the public. Journalists who report such propaganda, in the guise of appearing “balanced,” do a disservice to their audience. That’s why constant vigilance and total transparency is necessary for all legitimate media outlets.

Unfortunately, that’s also why iMediaEthics will never run out of work to do or hoaxes to uncover.

“Intent to Deceive: Fakes and Forgeries in the Art World” is on view in Springfield until April 27. It will be installed next, from May 23 to Aug. 2 at the John and Mable Ringling Museum of Art in Sarasota, Fla.

Alan Bisbort is the author of Media Scandals (Greenwood Press), which examines recurrent themes and specific examples of media fraud in American history. His work has appeared in the Washington Post, New York Times, Hartford Courant, Rolling Stone and Creem. He is a regular contributor to the Hartford Advocate and Literary Kicks.

iMediaEthics re-worded a caption for the painting of a woman and a ‘Fauve Landscape’. To be precise, the paintings are in the style of Modigliani and de Vlaminck, respectively, signed by the forger, de Hory, as opposed to, his earlier behavior where he signed the artist’s names in an illegal attempt to pass off the work as originals. Thanks to Mark Forgy, de Hory’s heir, for pointing this out.