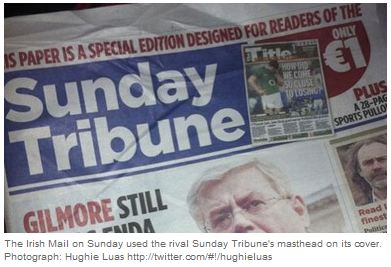 Was it a marketing exercise or a copyright infringement on the Tribune? See above, the Irish Daily Mail's wraparound that adopts the Tribune's masthead. (Credit: Twitter, HughieLuas, via Greenslade Blog)

According to the Irish Journal, the wraparound stated it was “a special edition designed for readers of the Sunday Tribune,” and wasn’t featured on every issue of the Mail.  However, readers may easily have believed that the newspaper was the Tribune.

But, because the Tribune is currently in “receivership” — meaning not being published because of funding issues — The Mail on Sunday’s decision has been criticized heavily and the Tribune’s parent company is calling for the Mail to be ousted from the Irish newspaper union, National Newspapers of Ireland.

The receivership was announced in early February and the Tribune won’t be published for four weeks. In a statement published on its website, the Tribune explained:

“Following a review by the Receiver, in consultation with the management of the company, of the financial and risk areas of the Sunday Tribune it has been decided that publication of the newspaper together with its online edition will be deferred during the sale process.”

In response to the wraparound, the Sunday Tribune’s editor, Nóirín Hegarty, reportedly stated she was “appalled and shocked” and criticized the Mail for “a shameless act of commercial vandalism.”

“I am appalled and shocked that another newspaper would stoop so low to plagiarise a front page lookalike of the Sunday Tribune with the naked ambition of gaining extra circulation.

“The Mail On Sunday has shown in this act that it will leave no stone unturned in the race to the bottom.

“The Tribune management and staff and indeed Jim Luby the Receiver are working flat out in the hope of keeping the  newspaper afloat. We are talking about 43 jobs in Ireland here, not extra remuneration for Associated Newspapers back in the UK.”

The Irish Mail’s editor Sebastian Hamilton reportedly backed the newspaper’s wraparound by claiming it was a “marketing exercise… to persuade as many Tribune readers as possible to keep buying newspapers,” The Guardian reported.

“We wanted to make sure those readers were aware that the Irish Mail on Sunday is an Irish paper,” Hamilton is quoted as saying.  “It employs 161 people here in Dublin – almost four times as many as the Tribune… is written here, edited here, printed and produced here… today’s marketing exercise encourages more people to buy a paper today, surely that is something we should encourage.”

“This was an attempt to confuse readers and to cash in on the crisis at the Sunday Tribune in a crass manner which does no credit to the Irish Mail on Sunday or publishers, Associated Newspapers.”

The Sunday Tribune and the NUJ “both lodged formal complaints” with the National Consumer Agency against Associated Newspapers, the parent company of the Irish Mail and Mail on Sunday

A spokesperson for the Independent News and Media explained the call for ousting and is quoted as saying:

“In light of the ‘Irish Mail on Sunday’s’ action last week, when it deliberately and blatantly passed itself off as the ‘Sunday Tribune’ newspaper, we are seeking the expulsion of the ‘Mail on Sunday’ from the trade group, the National Newspapers of Ireland.”

However, as of Feb. 9, the spokesperson reportedly said “no final decision had been made on whether or not it would take legal action against Associated Newspapers.”

The National Consumer Agency commented on the complaints it has received, The Guardian reported:

“Following further consideration, the National Consumer Agency is now considering a prosecution for a breach of the Consumer Protection Act. Accordingly, the agency will be making no further comment on this issue.”

iMediaEthics has written to Tribune’s editor Hagerty, the Irish Daily Mail, National Newspapers of Ireland, the National Union of Journalists and the National Consumers Agency for comment and will update with any response.