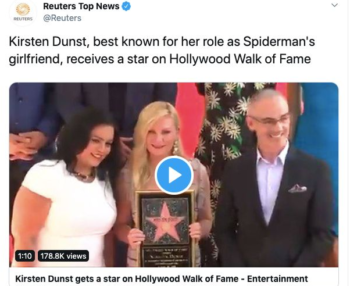 A screenshot of the tweet that has been deleted

Reuters tweeted, “Kirsten Dunst, best known for her role as Spiderman’s girlfriend, receives a star on Hollywood Walk of Fame.”

Reuters has deleted the tweet and then tweeted, “Award-winning actress Kirsten Dunst receives a star on the Hollywood Walk of Fame.” The Huffington Post posted a screenshot of the original tweet before it was deleted.

According to Insider, Dunst called the tweet “careless” and “ignorant” as well as “pretty s****y.”

“It was a very ignorant tweet, and it was done probably very carelessly — by a man,” she is quoted as saying.

A Reuters spokesperson told iMediaEthics, ““Our tweet was a mischaracterization of Ms. Dunst’s accomplishments as an actress and we immediately corrected it in accordance with our guidelines. We regret the error.”