'Is it even worth covering media mistakes?' Politico asks?

‘Is it even worth covering media mistakes?’ Politico asks 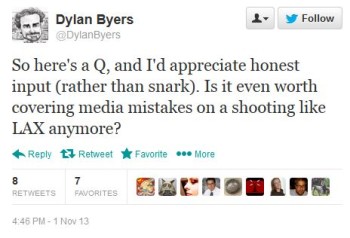 In response to breaking news errors in reporting on last week’s shooting at Los Angeles airport, Politico’s Dylan Byers asked on Twitter if it’s “even worth covering media mistakes on a shooting like LAX anymore?”

As iMediaEthics has written, the Globe and Mail wrongly reported that former NSA chief Michael Hayden was killed at the airport. Additionally, a few other media outlets including the LA Times and NBC News erred as well in reports on the shooting..

On Politico’s website, Byers posted several responses to his question, answering yes because in order to correct “misinformation,” and no because it’s “just the way breaking news works now.”  Byers said he agreed with tweeter Matthew Wells who wondered “Why don’t people wait for official confirmation?”  Byers wrote:

“Because it’s breaking news, and breaking news is messy. Because there’s air to fill. Because ratings. Because… I don’t know, but it’s a question that deserves consideration.”

iMediaEthics also responded to Byer’s tweet. Our response is below:

.@DylanByers Of course! Important to document facts and dispel rumors, errors, for the public. And to hold media accountable

‘Is it even worth covering media mistakes?’ Politico asks