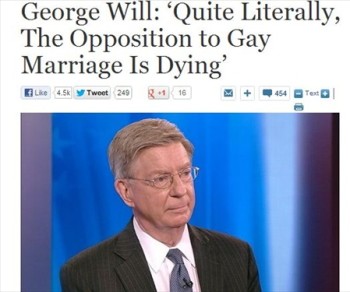 George Will commented last month on ABC’s This Week Sunday that “Quite literally, the opposition to gay marriage is dying. It’s old people.”

Noel Sheppard at Newsbusters, a conservative website devoted to “exposing and combating liberal media bias,” took issue with Will’s comment, arguing that it was “guaranteed to anger conservatives while delighting liberals.”

Not only that, Sheppard suggests that it’s not just old people who are opposed. He cites a recent Pew poll that (allegedly) shows religious people, Republicans, and conservatives all “strongly opposed” to same-sex marriage, with a majority of blacks also opposed. And, he adds, almost a majority of men (44%) are also opposed.

Folks, this is a situation where the aphorism, “Lies, Damn Lies, and Statistics,” comes to mind. A good part of the confusion is caused by the pollsters. The other part is caused by not paying attention to the details.

It’s important to note that pollsters typically do not measure “strong opposition” or “strong support” for most policy issues, including this one. And in the rare occasions when they do measure intensity, they often don’t report it.

Intensity is important, because – as I discussed in the iMediaEthics poll report on same-sex marriage – many people will express opposition or support for an issue, but then immediately admit that they would not be “upset” if the opposite occurs to what they had just said. Such people are pressed by pollsters to give an opinion, but aren’t committed to that view – it’s just something they say to get on to the next question.

My view is that such lightly held opinions should not be treated with the same gravity as opinions that people feel “strongly” about, or opinions that they would like to see prevail. If someone says they would not be upset, not even “somewhat upset,” if the opposite happened to what they wanted, then that person does not really care if their opinion prevails or not.

That’s what Pew did in measuring attitudes about same-sex marriage. They reported intensity overall, but then combined the weak and strong opinions in one percentage when reporting the results among various demographic groups of people.

That’s why Sheppard was incorrect when he wrote that Pew showed Republicans, conservatives and religious people all “strongly opposed” to same-sex marriage. Pew combined the “strong” opinions with the weak ones, making it impossible to identify what is meaningful support and opposition. But Will was also incorrect when he suggested that most “old people” are opposed. They aren’t.

So, what is the truth behind all these assertions? Let’s look at that Pew poll cited by Sheppard. That poll reports 40% of Americans “opposed” to “allowing gays and lesbians to marry legally,” but just 19% strongly opposed. (In their earlier June/July poll, Pew found 44% opposed overall, but just 24% strongly opposed.)

So, using the iMediaEthics results (which show more people with intense opinions than Pew), what groups are intensely opposed to gay marriage?

Only 40% of people 60 and older are intensely opposed, which declines to 22% among adults under 30.

Blacks overall are less supportive of gay marriage than whites, but also less opposed. A majority of blacks, Hispanics, and Asians would not be upset either way, with no more than a quarter of any group intensely opposed.

So, what of George Will’s observation that opposition to gay marriage is “literally dying”? Actually, with intensity of views taken into account, age is not the most important differentiator on this issue. Party identification and political ideology are much greater factors.

Still, are younger people — even among the groups who are most opposed — less likely to oppose gay marriage than older people in that group? If so, that would suggest over time, as Will so inelegantly implied, that as the older people in the group die off, opposition will decline.

In the graph below, opposition to gay marriage is plotted across four age groups for Republicans, independents, and Democrats. Although the lines are not straight, they do indicate that older people in each partisan group are more likely to oppose gay marriage than the younger people in that group.

The same plots across age for conservatives, moderates and liberals show a somewhat different pattern. For both conservatives and independents, younger people are indeed less likely to oppose gay marriage than the older groups. But among liberals, there is little difference by age. Only a very small percentage are strongly opposed.

Finally, this last chart shows a substantial gender gap among young people, which declines among the older people. The gap is the result of young women much less opposed to gay marriage than young men (10% vs. 35%). But in the older age categories, the gap diminishes as the older women are, the more likely they are to express opposition. For males, there is little variation among age categories.

Overall, these results partially support George Will’s general thesis — that over time, opposition to gay marriage will probably decline just because the younger generation is less opposed than the older generation. But there is the caveat — that young men are not that much different in their views from older men.

Still, the broader picture needs to be kept in mind. Even today, there are few groups that are strongly in favor, and few groups that are strongly opposed, to gay marriage. Overall, less than a third of Americans are intensely opposed — 31% using the iMediaEthics measure of intensity, just 19% according to Pew’s intensity measure. That’s a much different picture from what most pundits recognize.