Kim Jong Il's image of health not improved with Fauxtography

Is there a Photo Doctor in the house? Kim Jong Il Pics Faked 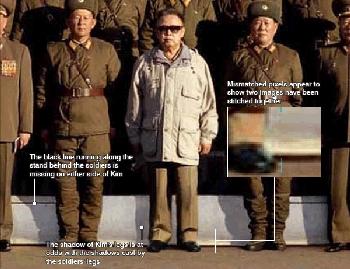 "Dear Leader" Kim Jong-il's recent appearances in photographs--but not the reality--suggests a photo doctor may be playing an important role in Kim's health care. "Take these two propaganda photos, and call me in the morning."

When it comes to power, the illusion of health–if not the reality –will serve just as well. Or will it? BBC wrote: “There is fresh speculation about the health of North Korea’s ‘ Dear Leader ‘ Kim Jong-il, amid suggestions that an image of Mr Kim may have been doctored.”

BBC stated, “An analysis by the UK’s Times newspaper highlighted incongruities around the leader’s legs, and the BBC found what look like mismatched pixels…

“Such a suspicion was reinforced when a BBC designer examined a close-up, and discovered apparently mismatched pixels to the right of Mr Kim’s legs.”

Who knew that some countries need better medical care and photo doctoring providers to help maintain a leader’s health?

Is there a Photo Doctor in the house? Kim Jong Il Pics Faked