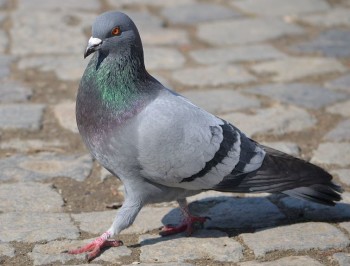 The UK Mail started the false claim with its June 2 article, “ISIS bans pigeon breeding — punishable by public flogging — because seeing birds’ genitals overhead offends Islam,” according to Snopes. But the real ISIS ban on pigeon breeding is because the practice can lend itself to snooping and invasion of privacy.

The media latched on to a literal translation of the document.

iMediaEthics has confirmed with our own Arabic translation that the document doesn’t refer to pigeon genitals at all.

Snopes conducted a reverse image search and discovered that the document the Mail cited as its source for the shocking pigeon-genitals claim “was first published on the web site of Aymenn Jawad Al-Tamimi, a British researcher and archivist who specializes in Islamic State-related news and developments,” even though the Mail didn’t credit the site.

Error came from Confusion in Translation

The ISIS document from Feb. 9, 2015, “Prohibition on pigeon-keeping above the roofs of houses,” translated, stated in part:

“So the Muslim populace must inform the Hisbah of any person who has taken it upon himself to continue this line of work and that is to put a stop to the greater criminal act of harming one’s Muslim and Muslim women neighbours, revealing the genitals and wasting time.”

But after the media coverage, Al-Tamimi updated the translation to explain the genitals phrase was an idiom. Al-Tamimi wrote, “a number of subsequent media reports have misinterpreted this phrase literally. I had assumed that it would be taken as a mere idiom for dishonourable activity, but instead outlets such as The Daily Mail have interpreted this to mean revealing the pigeon’s genitals (which wouldn’t make any sense). ”

iMediaEthics independently confirmed that the ISIS directive did not ban pigeon breeding because of bird genitals.

Our Arabic translator, Mai El Shamy, explained that the Arabic word “humurat” — the word which had been translated as genitals — “is a general word that means the sacred rites.” El Shamy tells us: “It can also be the private life and belongings of anyone which no one else is allowed to look at. In fact, it is one of the most general Arabic words that has many meanings.”

“In this specific statement, it means that some people may misuse the act of keeping pigeon on the roofs of their homes just to stare and look at their neighbors’ homes and see what they may be doing inside. It is like violating the privacy of others under the pretext of keeping pigeons,” our translator explained.

The Mail is one of the first news sites that claimed genitals were at fault for the pigeon-breeding ban, according to Snopes. The Mail’s article claimed in part:

“Senior clerics fighting for the Islamic State in Syria and Iraq have issued a diktat banning pigeon breeding as they claim the sight of the birds’ genitals as they fly overhead is offensive to Islam.”

It goes on to say: “The new document clears up that misunderstanding, clearly stating that the ban is intended ‘to put a stop to the greater criminal act of harming one’s Muslim and Muslim women neighbours, revealing the [pigeon’s] genitals and wasting time.'”

The Mail did not credit Al-Tamimi though. Al-Tamimi told iMediaEthics, “It might be possible they found the document independently, but it is notable how the translation given by the Daily Mail exactly follows my own in wording and expression (minus their extrapolation of pigeon genitals), and I recognize my own style of translation quite well. So it’s pretty clear they stole this document and translation from my site. For me, that crosses the line.”

Numerous outlets and HBO’s Bill Maher covered the claim, but Snopes pointed out that “all roads (in this instance) led back to one source: the Daily Mail article; and that article provided no source for its claim, other than a single document in Arabic described as containing the bizarre directive.”‘

Al-Tamimi told iMediaEthics “It was the Daily Mail’s sensationalist spin, as you note, which made the myth go viral. Frankly, it is an extremely silly extrapolation to make from the original document considering most birds (incl. pigeons) don’t even have visible genitalia.”

Who Else Thought Pigeon Genitals Started the Ban?

UK Express: “Now ISIS bans pigeons – because looking at them as they fly away is against Islam”.

The Express listed no source at all for its story but did use this kicky Photoshop: A screenshot of the UK Express’s headline and image.

UK Gizmodo: “ISIS bans pigeon breeding – because bird genitals are ‘offensive to Islam.'” Gizmodo UK credits the Mail Online for its story and also had fun with its image. Gizmodo UK used this image with the story.

Pakistan’s The Nation: “Pigeon breeding punishable by flogging, execution: ISIS.” Listing the Mail as a source, The Nation wrote: “Senior clerics fighting for the Islamic State in Syria and Iraq have issued a diktat banning pigeon breeding as they claim the sight of the birds’ genitals as they fly overhead is offensive to Islam.”

The Washington Free Beacon: “Islamic State Bans Pigeon Breeding; Bird Genitals Deemed Offensive.” This story also credited the Mail, writing: “Bird genitals can be seen when pigeons are flying overhead. This sight offends the Islamic faith, according to reports about the ban on breeding pigeons.”

The IJ Review: “ISIS has banned pigeon breeding for what might be the most ridiculous reason imaginable.” Sourced to the Mail, this story claims: “That’s right — the sight of an animal’s private bits is now insulting to Islam, according to the Islamic State.”

The International Business Times: “ISIS imposes ban on pigeon breeders as sight of birds’ genitals is against Islam.” Sourced to the Mail.

Albawaba: “Daesh bans pigeon breeding in the ‘caliphate’ due to offenisve, low flying genitals.” Linking to the Mail, Albawaba also got creative with its image. Its story was headlined “Isil bans pigeon breeding to stop women being seen on roofs.”