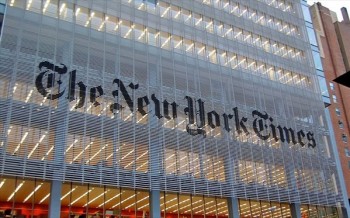 In the New York Times‘ August 1 article, “Gaza Fighting Intensifies as Cease-Fire Falls Apart,” the newspaper revealed that it was the first time “in more than six years” Israel wanted prior review.

The Times said it didn’t fully comply with the order. Instead of sending “a draft of this article,” they just “summarized” the section of its article about Goldin in a phone call. The Times‘s report reads, as of August 2:

“Israel’s military censor informed The New York Times that material related to the missing officer had to be submitted for review, the first such notification in more than six years. International journalists must agree in writing to the censorship system in order to work in Israel. The Times did not send the censor a draft of this article before publication, but summarized over the phone its biographical references to Lieutenant Goldin.”

Interestingly, the Huffington Post noted that the Times didn’t include that paragraph about the censor until “nearly six hours” after publication, pointing to News Diffs’ record of changes to the article. News Diffs is a website that tracks changes to articles by some news outlets. Since the article has been updated likely several times following its initial publication, the prior review request related to information on Goldin may have come hours after publication.

iMediaEthics wrote to the Times to ask when exactly the paragraph was added and why it was added after publication.

In a report just published tonight, the Times reported Goldin is “now believed dead.” iMediaEthics asked the Times if they were required to submit or read any portion or summary of this article to the military before publication, and if the gag order is over now that Goldin is reportedly dead.

“We are not submitting NYT articles for prior review by Israeli censors. We are aware of a very narrow issue that concerns the censors about the background of the captive solider. And our reporters in Israel have not reported on that issue. But censors are not reviewing what we publish prior to publication.”

Times public editor Margaret Sullivan wrote about the Israeli request. According to Sullivan, Times foreign editor Kahn described this instance as “military censorship” as opposed to a “gag order.”

Kahn explained that New York Times staff in Israel is held to the prior review requirement.  But, he said the Times hasn’t sent any articles for approval.

“Our accredited staff in Israel cannot legally publish stories on subjects the censors declare a matter of national security unless they are reviewed by censors and cleared,” he told Sullivan. “In this case, they have declared detailed reporting about the missing Israeli soldier a matter that the censors need to review. ”

He added, “We do of course use our full international staff to cover important issues, and The Times as a whole is not subject to Israeli censorship. So our broader report is not necessarily impacted by a censorship order in Israel or any other country.””

For example, Sullivan noted the Times can skirt the prior review requirement if a journalist based outside of Israel writes about the issue the government wants to censor, like earlier this year when the Israeli government put in place a “court-imposed gag order” about reporting on journalist Majd Kayyal, who had been detained.

Calling the gag order “disturbing,” Sullivan commented that at least Israeli military had a “narrow” request for review — that being stories on the soldier Goldin.

“This instance is not entirely dissimilar to the American government holding back details on an American citizen, for example, a soldier, diplomat or spy caught up in hostile action, that could place that person in greater jeopardy,” Sullivan wrote.

In a statement to the Huffington Post, Kahn added “We are aware of a very narrow issue that concerns the censors about the background of the captive solider…And our reporters in Israel have not reported on that issue. But censors are not reviewing what we publish prior to publication.”