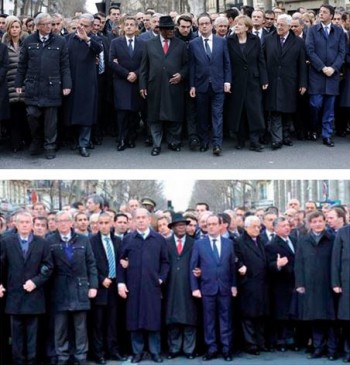 Israeli newspaper Hamevaser doctored Angela Merkel and two other women from a photo of the march in Paris this past weekend after the attacks on Charlie Hebdo magazine, the Associated Press reported.

The Photoshop was seemingly for religious reasons, as Hamevaser is “a small Jewish ultra-Orthodox newspaper in Israel,” the AP says. Hamevaser means “The Announcer’ and the paper was founded by United Torah Judaism’s Meir Porush,  according to Israeli newspaper Haaretz.

Hamevaser isn’t the first Orthodox news outlet to refuse to publish photos of women in its pages, instead resorting to Photoshop.

Back in 2011, two Hasidic news outlets Photoshopped an image from the U.S. Situation Room during the attack on Osama bin Laden to remove then Secretary of State Hillary Clinton and Director of Counterterrorism Audrey Tomason, as iMediaEthics previously reported.  New York Hasidic paper Der Tzitung apologized  for the doctoring and said it cut the women out “because of the laws of modesty, we are not allowed to publish pictures of women.”  Brooklyn weekly magazine Dee Voch also doctored the image to remove the two women.

Hamevaser’s doctored photo was published on the paper’s third page, according to the New York Times.

An image of the page in question (Credit: Hamevaser, via AP)

The AP noted that Merkel wasn’t the only woman removed from the photo, as Paris’ mayor and the EU’s foreign policy chief were removed.

“The picture in Hamevaser cut out other women, like Paris Mayor Anne Hidalgo, though the newspaper clumsily left her dark glove on the sleeve of a marcher,” the AP explained. “The European Union’s foreign policy chief, Federica Mogherini, was also cropped out.”

The paper’s editor seemingly defended the Photoshop, telling Israel’s Channel 10, according to AP, saying that it doesn’t show women.

“The 8-year-old can’t see what I don’t want him to see,” editor Binyamin Lipkin said in the interview with Israel’s Channel 10. “True, a picture of Angela Merkel should not ruin the child, but if I draw a line, I have to put it there from the bottom all the way to the top.”

iMediaEthics has written to the founder of Hamevaser for more information about its decision to Photoshop.