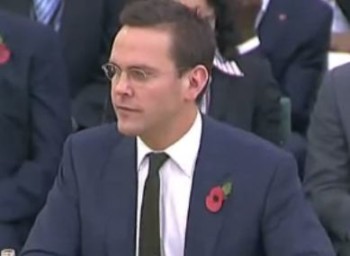 James Murdoch resigned as BSkyB chairman April 3, USA Today reported. He will still be the deputy chief operating officer of News Corporation, according to USA Today.

When his February resignation from News International — the UK arm of News Corp.’s newspapers — was announced, his father, News Corp. CEO Rupert Murdoch was quoted in the News Corp. press release as saying that James Murdoch “continues to create great value at Star TV, Sky Deutschland, Sky Italia, and BSkyB.”

James Murdoch explained his April resignation from BSkyB was to prevent his being “a lightning rod” for the company and suggested that it was to avoid any further questions of News Corp.’s UK entities being carried over to BSkyB, USA Today noted.

In July 2011, News Corp. announced it was ending its “$12 billion bid” to have control over BSkyB just after closing News Corp.’s News of the World, as we wrote at the time.  The closure came after increasing accusations of phone hacking against the newspaper.  News Corp. still owned 39% of BSkyB when it dropped its bid for control though.

Former News of the World crime editor Lucy Panton told the Leveson Inquiry into press standards and practices that as a reporter she didn’t “buy favours by wining and dining police officers,” according to Sky News.

Panton was questioned on whether she drank champagne with police officers, according to Sky News, and while she noted that she used to drink some at the police events, she rejected suggestions that journalists “live a champagne lifestyle.”

A UK police chief rejected questions at the Leveson Inquiry March 27 about the police providing “off-the-record briefings to the press about Christopher Jefferies,” Journalism.co.uk reported.

Jefferies, as iMediaEthics has written, was the landlord of a woman named Joanna Yeates who was found murdered in 2010.  Jefferies was arrested by the police during the investigation and later released, and another man, Vincent Tabak, was convicted in Yeates’ murder. However, the media’s coverage of Jefferies led to numerous legal actions.  Two UK newspapers — the Daily Mirror and the Sun — were fined for contempt of court, and eight UK newspapers paid Jefferies libel damages for their coverage, as we have written.  At the Leveson Inquiry last year, Jefferies said he was “shamelessly villified” by the press.

The chief, Colin Port, Avon and Somerset police chief constable, said that the police “don’t give off the record briefings. To behave in a collusive manner is abhorrent,” according to Journalism.co.uk.

Apologies for Giving Out Personal Info, from former NOTW Editor

A former News of the World editor apologized to chef Gordon Ramsay for giving out his “personal family pictures and medical information provided by the chef’s former business partner and father-in-law, Christopher Hutcheson” to newspapers, the Guardian reported.

The former editor, Phil Hall, who is currently the “founder of PR agency Phil Hall Associates,” explained in his apology that Ramsay’s father-in-law, a former client, gave him this information and “asked [him] to pass certain stories to the newspapers” about Ramsay, and now Hall says he “should have guessed” the information “may have come” from “illegitimate means.”

The Guardian noted that “It had emerged during a previous legal battle between Ramsay and Hutcheson that the chef’s former father-in-law had unlawfully accessed his emails.”