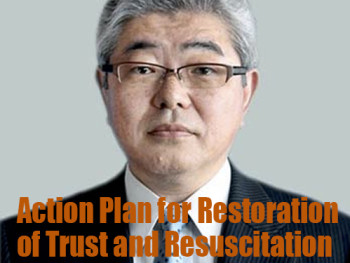 That move is part of the newspaper’s reaction to its controversy-filled 2014, in which it was the subject of three high-profile ethical lapses.

The Asahi Shimbun promises it will also organize all of its corrections in one place, engage with readers better, and expand its investigations.

Asahi Shimbun president Masataka Watanbe said in a Jan. 5 press conference, “We will deeply take to heart the criticism that we lacked humility toward facts and truth and held an insufficient posture of lending an ear to criticism from society.”

He added that the newspaper established a “Committee for Restoration of Trust and Resuscitation” to help it reform.  “We also obtained the advice of experts from outside the Asahi so that we did not become ensnared in an inward-looking and narrow perspective,” he said.

He added that the newspaper plans to publish more “diverse perspectives” in its reporting so it doesn’t just publish its own point of view, something Watanbe said the paper was criticized for.

Back in the summer, Ikegami criticized the newspaper for its insufficient apologies for shoddy reporting on comfort women. As a result, the newspaper stopped publishing his column. The paper then issued an apology. And now, the Asahi Shimbun will run his columns effective Jan. 30.

iMediaEthics has written to The Asahi Shimbun for comment.

In addition to the news of the public editor role, the Japan Times noted that “more than 10,000 people are suing” the paper over the reports on comfort women, calling for both money and a paid advertisement apologizing.  “According to the suit filed with the Tokyo District Court, the plaintiffs, including researchers, journalists and lawmakers, are demanding ¥10,000 in compensation to each person, arguing that the newspaper “damaged Japanese people’s personal rights and honor,” the Japan Times reported.