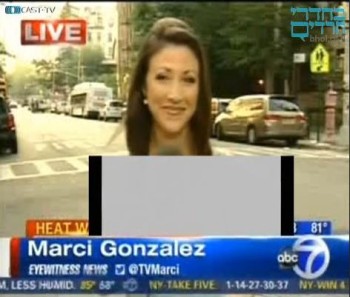 The news site, Behadrei Haredim, used the boxes to cover up “the chests of the female reporter and the female news anchor who report the story” in question, Rosenberg blogged. The June story, by New York City’s ABC-affiliate WABC News 7,  reported on New York’s hot weather.

We wrote to Behadrei Haredim asking why it does this.  In an e-mail, Behadrai Haredim reporter Shai Kohn told iMediaEthics that the site’s audience is ultra Orthodox Jews. Kohn said the site adds the boxes for religious reasons, writing via email:

“Sometimes there is such a material that has the utmost importance that readers will be exposed to it, but the content is viewed difficult for us to submit to our readers – our readers trust us, they watch our website hearted and relaxed knowing that the entrance to our website will not lead them to content and compositions may be in conflict worldview.

“With orthodox religious Jewish community: observation of a woman not married to you by the ‘great’ – is a departure from the rules and could lead to open each thought that refers relations between men and between women.”

We asked how many times the site has added the boxes.  Kohn told iMediaEthics that “such coverings are rare” and estimated “two or three times a year.”

We’ve written to ABC News 7 asking for comment about Behadrei Haredim’s altering of its video and will update with any response.

We wrote last year when two Hasidic newspapers Der Tzitung and Dee Voch Photoshopped the White House’s photo of the Situation Room to remove the two women pictured – Hillary Clinton and Audrey Tomason. Both newspaper later apologized for doing so.